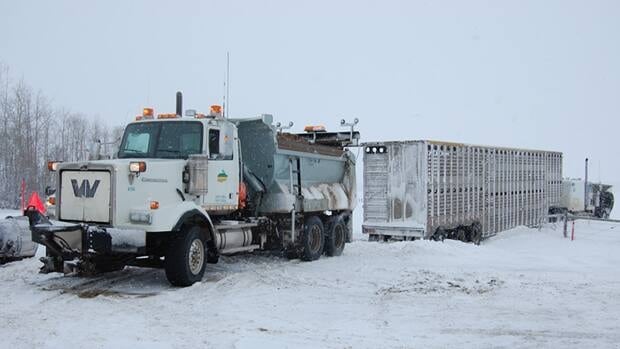 Collisions with snowplows and tow trucks on the sides of highways have prompted the Alberta government to push for broader rules for passing drivers.

“Albertans, traffic safety advocacy organizations, and those who work in highway maintenance wholeheartedly agreed that more needs to be done to protect roadside workers and make our highways safer.”

Currently, the law requires drivers to slow to 60 kilometres per hour, or the posted speed limit — whichever is lower — when driving in the lane next to pulled-over emergency vehicles, tow trucks and construction crews with their lights flashing.

Should Bill 5 pass as drafted, that courtesy would extend to snowplows and highway maintenance workers, such as those painting lines or repairing potholes. Officials said the consistency would create less confusion for drivers.

The legislation also seeks to require drivers in all lanes on a divided highway travelling on the same side as the parked vehicle to slow down.

On single-lane highways, drivers in both directions would need to reduce their speed when passing those work vehicles.

Should the legislation pass, the government would take time to set the fines for rule-breaking drivers, then run a public education campaign. The changes are  proposed to take effect in spring 2023.

Current fines for speeding past an emergency vehicle can range from $136 to $826. Sawhney said she didn’t know if the range of fines would change.

Alberta Transportation said in a three-year span from 2018 to 2021, there were 128 collisions involving snowplows contracted by the government. The Alberta Motor Association says there have been 13 serious collisions between tow trucks and passing vehicles since December 2019.

A public survey of 15,000 people held in spring 2021 found the majority of respondents said current passing laws were insufficient.

Sawhney said the changes, if approved, would also bring Alberta rules in line with the three other western provinces.

Sawhney said the intent of the changes is not to allow municipalities to set up more “cash cow” speed traps to nab errant drivers.

The survey also found 92 per cent of respondents wanted drivers to give roadside vehicles one lane of extra space while passing. Government officials said that requirement could be added later in the regulations.