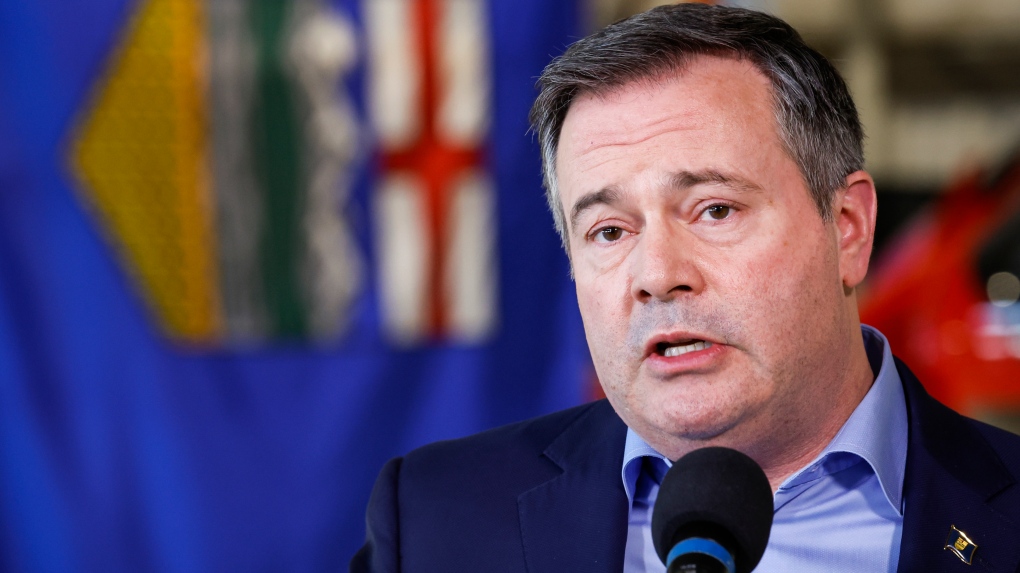 Alberta Premier Jason Kenney says he won’t apologize for comments he is heard making in recordings in which he compares political opponents in his party to insects and calls them lunatics.

Kenney says the United Conservative Party is under siege from extremist elements, including homophobes and religious bigots, seeking a hostile takeover by toppling him in an upcoming leadership review.

“I am determined to ensure that such hateful, extreme and divisive voices do not find a home in this mainstream broad conservative party,” Kenney told reporters in Calgary on Friday.

“That is an issue that is very much at play here and I will not apologize for calling out these kinds of voices of division.”

The private remarks he made to his staff were secretly recorded earlier this week, then leaked to the media.

In the remarks, Kenney is heard characterizing the fractious leadership review as a fight for the soul of his mainstream big-tent party.

“The lunatics are trying to take over the asylum. And I’m not going to let them,” Kenney says on the recording, as reported by CBC and Global.

“These are just kooky people generally,” he added.

He said the fight is a natural consequence of success, noting “a bright light attracts a few bugs. Well, there’s more than a few bugs attracted to us, this party, right now.”

Kenney said Friday he stands by his plan to listen to the will of the party in the leadership review, but he will otherwise stay in place to keep the UCP from fracturing.

Kenney’s comments cap a week of upheaval and anger within party ranks after UCP executive cancelled the April 9 leadership review and replaced it with a provincewide mail-in ballot.

The executive said with 15,000 members expected to vote, the process had become unwieldy for the planned one-day, in-person vote in Red Deer.

Two UCP backbenchers have called the change blatantly unfair and urged Kenney to resign. Some party constituency presidents representing thousands of members have also demanded the old rules be reinstated.

Segments of the party and Kenney rival Brian Jean, who recently won a byelection to rejoin the UCP caucus, had been selling memberships for months with the aim of getting Kenney turfed as leader at the review.

Kenney needs majority support or a race is called to pick a new leader.

Critics say Kenney was poised to lose the vote, so pressure was applied and the mail-in change was made to drastically expand the voter pool and boost his chances.

Jean lost the UCP leadership to Kenney in 2017 in a race marred by allegations of collusion and voting irregularities.

In Edmonton, Jean’s spokesman Vitor Marciano and David Parker of the citizen’s advocacy group Take Back Alberta said they will be asking the provincial election commissioner to investigate the membership drive.

They told reporters they are concerned UCP membership rolls may have been improperly inflated by Kenney supporters just prior to the Saturday cutoff.

They said the membership list was at about 29,000 before almost doubling to 55,000 in the space of a few days.

The two allege an estimated 18,000 names may have been added without the registrants’ knowledge and with the $10 fee for each registration paid in bulk by credit card or through a cheque. Adding those names and bulk-paying the fee, they said, would violate provincial election laws.

“While Mr. Jean might want to spend his time suing the UCP to prevent members from voting, we are encouraged by the widespread interest from UCP members to remain engaged and active in this big-tent conservative movement,” said Fleming.

Marciano and Parker also said some of the ballots in question were paper ones while the rest were added electronically and shipped via a web portal set up by the party.

UCP spokesman Dave Prisco, when asked about the party setting up a web portal for Kenney, said such portals are routine and legal.

“Their purpose is to get candidates to do the data entry work for us. They still must still follow all rules outlined on our website,” said Prisco in a statement.

This report by The Canadian Press was first published March 25, 2022