A spring camp is giving girls a chance to explore the trades and breaking down barriers around male-dominated industries.

The four-day camp is put on by CAREERS: The Next Generation for students in Grades 9 to 12.

“These are very male-dominated industries so young women don’t always think that they can explore these options or have a career,” said Taryn McDonald, a program coordinator at CAREERS. “So we’re here to show them that they too can have a career in the trades.”

The camp will give the students a chance to explore carpentry, heavy equipment, cooking and wastewater treatment.

“When I first started out in the trades, a lot of the time I was the only female in my trade on site. There’s been such a progression, there are so many more women coming up in the trades now,” said Emma Ash, the education coordinator and apprenticeship liaison for the Alberta Regional Council of Carpenters and Allied Workers.

Ash, who also works as a journeyman scaffolder, enjoys being able to be a teacher for women getting started in the trade.

“Learning how to do things in a way that worked for my body… there wasn’t a female around to teach me that, I had to learn that for myself… now I can teach that to the females coming onto site,” said Ash.

There are 12 students taking part in the camp this year. Some already have a career path in mind, while others are experiencing the trades for the first time.

“My entire family’s part of trades or teach trades and I’ve just been kind of thrown into it and I love it,” said Emaley Wilson, a Grade 10 student who wants to pursue a career as an auto mechanic. 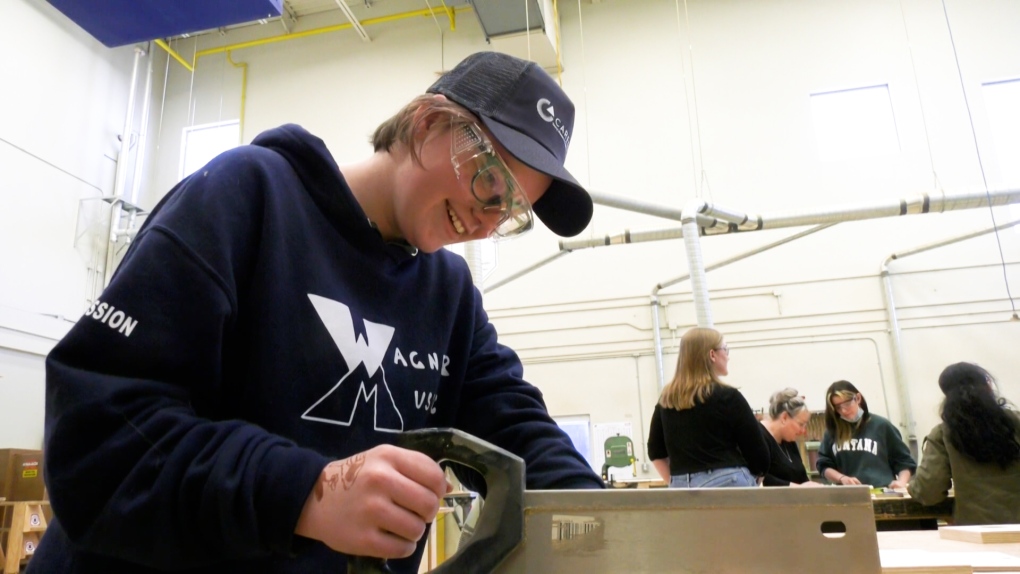 “Life is short and also interesting so why don’t you go out and try some new stuff, stop being stuck in your comfort zone,” added Roxy Yeung, a Grade 11 student.

CAREERS is a non-profit organization that also helps connect young people with mentors and internships to help them on their career path.

“I’ve only had men to look up to and I was always like, ‘I wonder if a woman can do this,’ and knowing that I can do everything that I want, it feels odd that there are only men doing it,” said Wilson.

“It’s so powerful when a young girl, when a young person realizes they can go and have a career in something they never realized was an option for them,” added McDonald. “We know Alberta is going to be short about 45,000 skilled trades workers here in Alberta, so if we don’t start empowering some of our young girls… that shortage is going to be even greater.”

This is the fifth year for the program. They had to take a break over the pandemic, but were able to connect students virtually with mentors during that time.

“They can show them the way, some of the trials and tribulations they’ve had to overcome and show them that they can get through it, be a bit of a support group for them moving forward,” said McDonald.

The program has had around 100 girls participate since it started. Camps have already been held this year in Peace River and Calgary, and others are planned for Fort McMurray, Lethbridge and Medicine Hat.