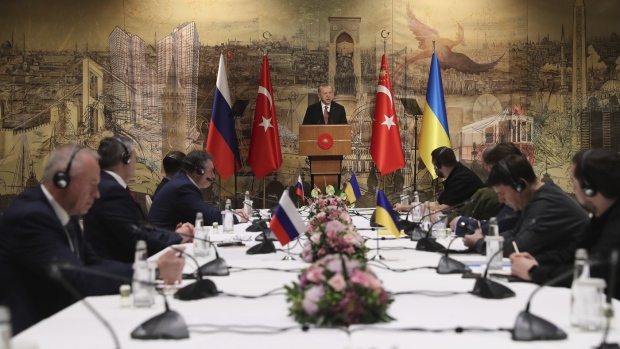 KYIV, UKRAINE — The first face-to-face talks in two weeks between Russia and Ukraine began Tuesday in Turkey, raising flickering hopes there could be progress toward ending a war that has ground into a bloody campaign of attrition.

Ahead of the meeting in Istanbul, the Ukrainian president said his country is prepared to declare its neutrality, as Moscow has demanded, and is open to compromise over the contested eastern region of Donbas — comments that might lend momentum to negotiations. But he warned the “ruthless war” continued, and even the negotiators assembled, Russian forces hit an oil depot in western Ukraine and a government building in the south.

Turkish President Recep Tayyip Erdogan told the two sides that they had a “historic responsibility” to stop the fighting.

“We believe that there will be no losers in a just peace. Prolonging the conflict is not in anyone’s interest,” Erdogan said, as he greeted the two delegations seated on opposite sides of a long table. Also in the room was Roman Abramovich, owner of Chelsea Football Club.

A longtime ally of Russian President Vladimir Putin who has been sanctioned by Britain and the EU, the billionaire has been playing an unofficial mediating role. Kremlin spokesman Dmitry Peskov said Abramovich has been “ensuring certain contacts between the Russian and Ukrainian sides” and that his role was approved by both countries.

Putin’s aim of a quick military victory has been thwarted by stiff Ukrainian resistance — but still hopes were not high for a breakthrough. Reflecting skepticism among Ukraine’s Western allies, British Foreign Secretary Liz Truss said she thought the Russian president was “not serious about talks.”

In fighting that has devolved into a back-and-forth stalemate, Ukrainian forces retook Irpin, a key suburb northwest of the capital, Kyiv, President Volodymyr Zelensky said late Monday. But he warned that Russian troops were regrouping to take the area back.

“We still have to fight, we have to endure,” Zelensky said in his nighttime video address to the nation. “This is a ruthless war against our nation, against our people, against our children.”

He also lashed out at Western countries, which he has repeatedly accused of not going far enough in either sanctioning Moscow or supporting Ukraine with weapons. As a result, Ukrainians were paying with their lives, he said.

“If someone is afraid of Russia, if he or she is afraid to make the necessary decisions that are important to us, in particular for us to get planes, tanks, necessary artillery, shells, it makes these people responsible for the catastrophe created by Russian troops in our cities, too,” he said. “Fear always makes you an accomplice.”

A missile struck an oil depot in western Ukraine late Monday, the second attack on oil facilities in a region that has been spared the worst of the fighting. On Tuesday morning, an explosion blasted a hole in a nine-story administration building in Mykolaiv, a southern port city that Russia has unsuccessfully tried to capture.

A gaping hole could be seen in the centre of the building in a photo posted on the Telegram channel of the regional governor, Vitaliy Kim. He said most people escaped the building and rescuers were searching for a handful of missing people.

“It’s terrible. They waited for people to go to work” before striking the building, he said. “I overslept. I’m lucky.”

Earlier Russia-Ukraine talks, held in person in Belarus or by video, failed to make progress on ending a more than month-long war that has killed thousands and driven more than 10 million Ukrainians from their homes — including almost 4 million from their country.

Russia has long demanded that Ukraine drop any hope of joining NATO, which Moscow sees as a threat. Zelensky indicated over the weekend he was open to that, saying Ukraine was ready to declare its neutrality, but he has stressed that the country needs security guarantees of its own as part of any deal.

As well as Irpin, Ukrainian forces also seized back control of Trostyanets, south of Sumy in the northeast, after weeks of Russian occupation that has left a landscape devastated by war.

It was unclear where the Russian troops went, under what circumstances they fled and whether the town will remain free of them.

Ukraine, meanwhile, said it would try to evacuate civilians from three southern cities on Tuesday. Deputy Prime Minister Iryna Vereshchuk said humanitarian corridors would run from heavily bombed Mariupol as well as Enerhodar and Melitopol. The latter two cities are under Russian control, but Vereshchuk didn’t address to what extent Moscow had agreed to the corridors, except for saying 880 people fled Mariupol a day earlier without an agreement in place.

— The head of the United Nations’ nuclear watchdog arrived in Ukraine to try to ensure the safety of the country’s nuclear facilities. Russian forces have taken control of the decommissioned Chornobyl plant, site in 1986 of the world’s worst nuclear accident, and of the active Zaporizhzhia plant, where a building was damaged in fighting. International Atomic Energy Agency chief Rafael Mariano Grossi said the war “is putting Ukraine’s nuclear power plants and other facilities with radioactive material in unprecedented danger.”

— Russia has destroyed more than 60 religious buildings across the country in just over a month of war, with most of the damage concentrated near Kyiv and in the east, Ukraine’s military said in a post Tuesday.

— Bloomberg News said it has suspended its operations in Russia and Belarus. Customers in both countries won’t be able to access any Bloomberg financial products and trading functions for Russian securities were disabled in line with international sanctions, it said. Bloomberg Philanthropies pledged US$40 million, meanwhile, in support for Ukrainians and refugees.

Putin’s ground forces have become bogged down because of the stronger-than-expected Ukrainian resistance, combined with what Western officials say are Russian tactical missteps, poor morale, shortages of food, fuel and cold weather gear, and other problems.

In response, Russia appeared to be concentrating more on Donbas, the predominantly Russian-speaking region where Moscow-backed rebels have been waging a separatist war for eight years, the official said.

While that raised a possible face-saving exit strategy for Putin, it has also raised Ukrainian fears the Kremlin aims to split the country, forcing it to surrender a swath of its territory. Still, Zelensky’s comments that he was open to compromise on the region indicated a possible path for negotiations.

Karmanau reported from Lviv, Ukraine. Associated Press journalists around the world contributed to this report.

Do you have both Ukrainian and Russian family members? How are you handling the crisis? Email dotcom@bellmedia.ca.