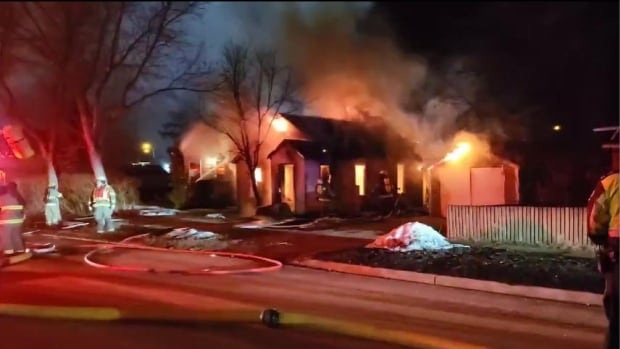 One person is dead and two others suffered non-life-threatening injuries as a result of a house fire in Vegreville, Alta., early Saturday morning, police say.

RCMP received a call about a house fire on 49th Avenue shortly after 1 a.m. Responding Mounties found two house occupants outside the home when they arrived on scene.

Fire crews extinguished the flames, but an adult female was found dead inside, police say.

Police say the medical examiner will examine the remains on Monday to determine the woman’s identity.

Paramedics sent the two residents who were found outside the home to hospital with non-life-threatening injuries.

The home is being held while fire investigators with RCMP and the office of the chief medical examiner determine the cause of the fire, as well as the victim’s cause of death.

Vegreville is 95 kilometres east of Edmonton.