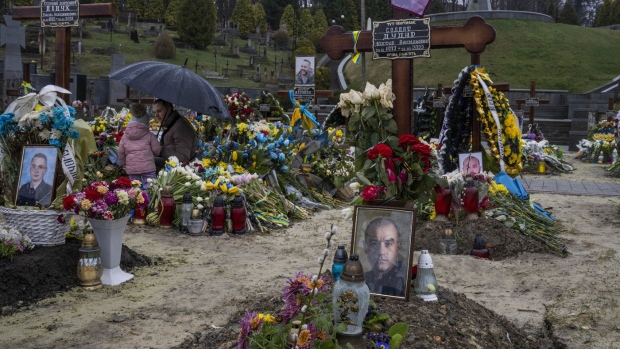 ANDRIIVKA, UKRAINE — WARNING: This story contains details that are disturbing

Ukrainian authorities identified bodies and pored over the grisly aftermath of alleged Russian atrocities around Kyiv, as both sides prepared Wednesday for an all-out push by Moscow’s forces to seize Ukraine’s industrial east.

Western governments were set to toughen sanctions against Russia and send more weapons to Ukraine, after President Volodymyr Zelenskyy pointedly accused the world of failing to end Moscow’s invasion of his country and what he said was a campaign of murders, rapes and wanton destruction by Russian forces.

In scarred and silent streets of ruined towns around Ukraine’s capital that Russian recently troops left, investigators collected evidence documenting what appeared to be widespread killings of civilians, some apparently shot at close range, others with their hands bound or their flesh burned. Specialists cleared mines from the areas, as Moscow focused its sights on a new assault on Ukraine’s east and south at the end of the war’s sixth week.

In Andriivka, a small village about 60 kilometres (40 miles) west of Kyiv, two police officers from the nearby town of Makariv came Tuesday to identify a dead man, whose body was left in a field beside tank tracks. Capt. Alla Pustova said officers had found 20 bodies in Makariv area.

Andriivka residents said the Russians arrived in early March and took locals’ phones. Some residents were detained and then released; others met unknown fates. Others described sheltering for weeks in musty, cramped cellars normally used for storing vegetables and pickles for the winter.

Now the soldiers are gone, and Russian armoured personnel carriers, a tank and other vehicles sat destroyed Wednesday on both ends of the road running through the village. Several buildings have been reduced to mounds of bricks and corrugated metal. Residents are struggling without heat, electricity or cooking gas.

“First we were scared, now we are hysterical,” said Valentyna Klymenko, 64. She said she, her husband and two neighbours weathered the siege by sleeping on stacks of potatoes covered with a mattress and blankets.

“We didn’t cry at first. Now we are crying.”

In towns around the capital, Zelenskyy said that civilians had been tortured, shot in the back of the head, thrown down wells, blown up with grenades in their apartments and crushed to death by tanks while in cars. He told the UN Security Council on Tuesday that those responsible should face war crimes charges in front of a tribunal like the one established at Nuremberg after the Second World War.

“Where is the peace that the United Nations was created to guarantee?” he asked.

Ukrainian authorities have said the bodies of at least 410 civilians have been found in towns around Kyiv, and Associated Press journalists in one, called Bucha, counted dozens of corpses in civilian clothes and interviewed Ukrainians who told of witnessing atrocities.

The Ukrainian president challenged the UN to kick Russia off the Security Council and “do everything that we can do to establish peace.” Barring that, he told the council: “Dissolve yourself.”

Thwarted in the their efforts to take the capital and forced to withdraw to Belarus or Russia to regroup, President Vladimir Putin’s forces are now pouring into Ukraine’s industrial eastern heartland of the Donbas, where the Ukraine military has said is it bracing for a new offensive.

In the Luhansk region, which lies in the Donbas, shelling of Rubizhne on Tuesday killed one person and wounded five more, regional governor, Serhiy Haidai, said on Telegram.

Ukrainian forces have been fighting Russia-backed rebels in Luhansk and the other Donbas region of Donetsk since 2014. Ahead of its Feb. 24 invasion, Moscow recognized the regions as independent states.

Ukrainian officials have stepped up calls for civilians to evacuate from towns in the east near the front line ahead of an anticipated Russian offensive, and some essential services were being moved away. Deputy Prime Minister Iryna Vereshchuk said regional governors in Luhansk, Donestk and Kharkiv had advised people to leave.

Local authorities in Sloviansk, scene of fierce fighting back in 2014, warned Wednesday that the postal and pensions infrastructure was being moved out, and bank branches in the town are shutting down.

Over the past few days, grisly images of civilians apparently killed by Russian forces in Bucha and other towns before they withdrew from the outskirts of Kyiv have caused a global outcry. At an audience Wednesday, Pope Francis kissed a battered Ukrainian flag that was brought to him from Bucha and called again for an end to the war.

In the wake of the killings, Western nations have expelled scores of Moscow’s diplomats and are expected to roll out more sanctions Wednesday, including potentially a ban by the European Union on Russian coal imports, amid a flurry of meetings of NATO, Group of Seven and EU diplomats.

Measures will also include a ban on all new investment in Russia, a senior U.S. administration official said, speaking on condition of anonymity to discuss the upcoming announcement.

“After the things the world saw in Bucha, sanctions against Russia must be commensurate with the gravity of war crimes committed by the occupiers,” he said in his late-night address.

Russia has insisted its troops have committed no war crimes.

Moscow’s UN ambassador, Vassily Nebenzia, said “not a single local person” suffered from violence while Bucha was under Russian control. Using to a tactic Russian officials have often relied on in the face of accusations of atrocities, he said scenes of bodies in the streets were “a crude forgery” staged by the Ukrainians.

On Wednesday, China, which has so far refused to criticize Moscow over the war, called for a probe into the killings, saying said images of civilian deaths are “deeply disturbing” but that no blame should be apportioned until all facts are known.

Elsewhere in Ukraine, the aid group Doctors without Borders said its staff witnessed an attack Monday on a cancer hospital in a residential district of the southern city of Mykolaiv. The group said Wednesday it was the third known strike in recent days on a hospital in the port city, whose capture is key to giving Russia control of the Black Sea coast. It said it had no overall death toll, but its team say one dead body.

The group said its team saw numerous small holes in the ground, scattered over a large area, that suggested the use of cluster bombs. Russia has denied accusations from rights group that it is using cluster munitions in Ukraine. Use of cluster bombs itself does not violate international law, but using them against civilians can be a violation.

Attacks on medical facilities and workers are deemed war crimes, and Russia has been accused of striking multiple medical facilities during the conflict, including a maternity hospital in the besieged southern port city of Mariupol, scene of some of the worst suffering of the war.

A team from the International Committee of the Red Cross has been trying to enter Mariupol since Friday and got within 20 kilometres (12 miles) of the besieged city, but the organization said security conditions made it impossible to enter.

Instead, the ICRC said that on Wednesday it led a convoy of buses and private cars carrying more than 500 people who had fled Mariupol on their own to the safer city of Zaporizhzhia.

“It’s clear, though, that thousands more civilians trapped inside Mariupol need safe passage out and aid to come in,” said Pascal Hundt, the ICRC head of delegation in Ukraine.

Negotiators from Russia and Ukraine have been discussing ways to end the fighting. Kremlin spokesman Dmitry Peskov said Wednesday that those talks continue despite the allegations of war crimes against civilians in Bucha.

Oleksandr Stashevskyi and Cara Anna in Bucha, Ukraine, Edith M. Lederer at the United Nations, Yuras Karmanau in Lviv, Ukraine, and Associated Press journalists around the world contributed to this report