An Edmonton boy with fast fingers and a great ear for music is quickly becoming an internationally-recognized musical prodigy.

While most eight-years-olds are attending Grade 3 this week, Liam Ng is in Brussels, Belgium preparing for performances in Vienna, Austria and London, England.

“When I was three I really liked music and then at five and three quarters I just did violin lessons,” Ng told CTV News Edmonton.

“We would have some toy instruments and, amazingly, he would actually be able to play out a melody,” explained Liam’s dad Angus.

Building on his natural talent, Liam practices at least two hours every day and has music lessons twice a week.

“Fantastic boy, very talented, and he has a wonderful family who support him,” said Svitlana Remniakova-Ostrovska, Liam’s music instructor. 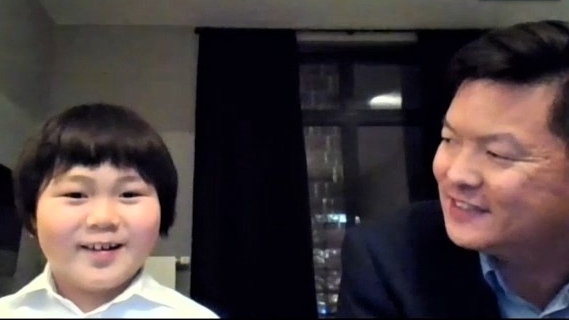 Liam Ng and his dad Angus during an interview with CTV News Edmonton.

Liam was recently amongst the winners of the Grand Prize Virtuoso, an international music competition. That honour came with an invitation to perform at the Musikverein in Vienna and at Royal Albert Hall in London.

“There’s like red chairs and Elton John’s piano is there,” Liam said, adding he plans to get a selfie on stage.The London venue seats more than 5,000 people, but Liam said he’s not nervous, because of advice from his mom.

“I’m there to show music to everybody else, to the world, not to compete and be stressful and breathing so heavily,” he recalled.

It’s all happening so fast for the youngster, but his parents and teacher said they’re being careful not to overwhelm Liam with the pressures of competition.

“We’re very proud but we’re also trying to remind ourselves that yes he’s eight years old and he still needs to go play outside and do other activities and get through school as well,” Angus explained.

“He loves music. We will not break him because of the pressure or something. I want him to enjoy life,” Remniakova-Ostrovska said.

Liam already has a clear goal for his future, although he’ll probably have to graduate from elementary school first.

“My goal is to be a soloist in the orchestra,” he said proudly.