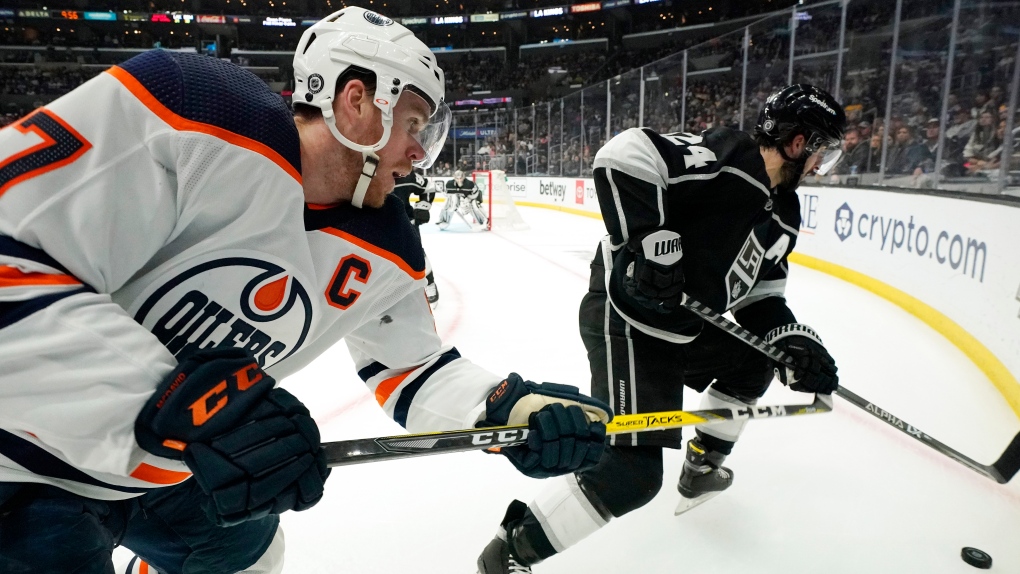 Connor McDavid set a career high with his 42nd goal and became the seventh player in NHL history to record multiple point streaks of at least 15 games in a season as the streaking Edmonton Oilers defeated the Los Angeles Kings 3-2 on Thursday night.

McDavid, who also had an assist, remained the league’s top scorer with 109 points. He has also scored in a career-best six straight games, which is the longest run by an Edmonton player since Jimmy Carson had a goal in seven in a row during the 1988-89 season.

“I can just tell you that all the offensive numbers that you see in there, they’re stunning,” coach Jay Woodcroft said. “He’s driving us forward with his offense, but he’s also driving it with his attention to detail on the defensive side of things.

“When your captain does that and when the leading scorer in the National Hockey League commits to playing like that, I think it resonates with the rest of the group and becomes a contagious type attitude.”

Evan Bouchard had his first three-point game in the NHL with a goal and two assists for the Oilers, who have won six straight to take a three-point lead over the Kings for second place in the Pacific Division.

The Oilers won three of the four meetings against the Kings in what could be a potential first-round series. Edmonton would currently have home ice advantage, but that is the furthest thing from Woodcroft’s mind.

“We’re going to rest up and our focus is not on home ice advantage,” he said. “It’s not on what other teams in the Western Conference did. It’s on the day’s business and I’m confident that if we put the necessary work in and we have the right focus that results in home ice advantage, all that kind of stuff takes care of itself.”

The Oilers have outscored opponents 27-13 during their winning streak.

“That’s a big focus of ours going into playoffs. You’ve got to be really solid defensively,” Bouchard said. “It helps when our goaltenders are sitting on their heads and that’s what they’ve been doing for us recently. It is really paying off for everyone.”

Trevor Moore had a goal and an assist for Los Angeles, which has dropped two straight and four of its last six. Viktor Arvidsson also scored, and Jonathan Quick made 27 saves.

“There are some preventable moments in tonight’s game. First one, awful line change on our behalf. We skated right by arguably the best player in the world, and he was going 100 miles an hour, so that doesn’t help us,” coach Todd McLellan said.

McDavid didn’t waste any time getting on the scoresheet. At 3:17 of the first period, he had a snap shot from just inside the left faceoff circle that beat Quick on his short side. McDavid is the first player since Wayne Gretzky in 1990-91 to have at least two point streaks of at least 15 games in a season.

Gretzky did it seven times, while Mike Bossy, Marcel Dionne, Guy Lafleur, Denis Savard and Bobby Orr were the others. McDavid has 29 points (13 goals, 16 assists) during his current streak.

Moore evened it at 1-all 2:29 into the second on a short-handed goal. Foegele gave the Oilers the lead back at 15:26 when he chipped it past Quick on an odd-man rush.

Bouchard made it a two-goal advantage with a slap shot from the point at 4:01 of the third. Arvidsson got the Kings back within a goal at the seven-minute mark with a wrist shot through traffic.