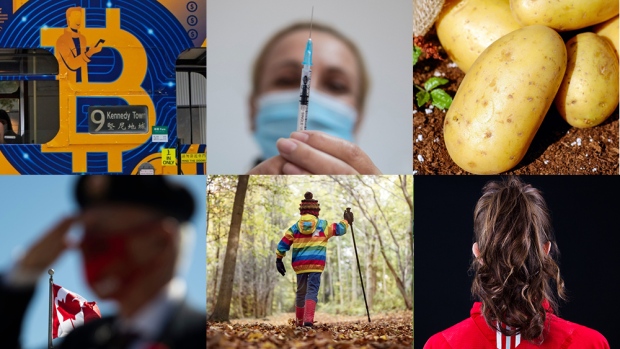 The 2022 federal budget was presented in Ottawa on April 7, unveiling billions in spending with the Liberals focusing on putting new money into housing, national defence, climate change, and dental care.

But, the nearly 300-page document included a host of other smaller-ticket spends.

From allowing the costs of surrogacy to be eligible for a tax credit, to studying the future of cryptocurrencies in Canada, CTVNews.ca has parsed the entire federal spending plan to pull out nine notable new initiatives unveiled in the budget.

Following through on a 2021 federal election commitment, the Liberals announced in the 2022 budget that they will be putting $79 million over the next five years towards help for Canadians who want to become parents.

For same-sex couples, those who are facing fertility issues, or individuals who want to become a parent on their own, the federal government will be moving to:

The government says this move is being made because “Canadians rely on surrogacy and expensive procedures in order to build the family they dream of,” though as the Child & Youth Permanency Council of Canada has noted, the budget stops short of helping families formed through adoption. In their election campaign, the Liberals said they would provide adoptive parents an additional 15-weeks of leave to level the playing field with other parents.

Likely stemming from a series of recent headlines about harassment and abuse in Canadian sport agencies including bobsled and synchronized swimming, the federal government is putting $16 million into supporting actions meant to create a safer sport system.

To be spent over the next three years, the Sport Dispute Resolution Centre of Canada will be using the funding as they implement a new “Independent Safe Sport Mechanism,” and it will be used to pay for an examination of national sport policies.

“Canada’s high performance athletes should feel safe in an environment that is free from abuse, harassment, and discrimination. However, many Canadian athletes have brought forward evidence of unsafe environments in competitive sports,” reads the budget.

While overall new spending related to the ongoing COVID-19 pandemic was far less than the last budget, the new fiscal plan does set aside $20 million to study the long-term effects of COVID-19 infections.

To be spent over five years, the Canadian Institutes of Health Research will be using the money to dig into “the long-term effects of COVID-19 infections on Canadians, as well as the wider impacts of COVID-19 on health and health care systems.” It remains to be seen what policy changes or other measures could come as a result of the findings.

Cryptocurrency is becoming an increasingly hot topic in federal politics, after the “Freedom Convoy” fundraising efforts notably included the use of digital currencies like Bitcoin.

In acknowledging the growing interest in the potential future of cryptocurrency, the federal government announced in the budget that they’ll be launching a “financial sector legislative review,” that will dive into the stability and security of the digitalization of money.

“The first phase of the review will be directed at digital currencies, including cryptocurrencies and stablecoins,” according to the budget.

To do this work, Finance Canada is getting $17.7 million for a five-year review process that will also consider how to adapt the financial sector’s regulatory framework, and “the potential need for a central bank digital currency in Canada.”

After potato wart fungus was detected in Prince Edward Island, sales were disrupted to the United States and the island’s industry is still struggling to get products back on American shelves.

To help restart the sector, the federal budget is:

GETTING RID OF ‘GHOST GEAR’

In a section looking at several ways to clean Canadian waterways, the federal government promises $10 million for Fisheries and Oceans Canada to renew the “Ghost Gear Fund” for another year.

This program is aimed at retrieving “ghost gear” — the term given to traps, nets, buoys and other fishing gear that get lost or discarded in the process of fishing, and remain drifting in the ocean — as well as helps test new fishing technology.

Ghost gear can destroy habitats and sea life, and may make up as much as 70 per cent of macro-plastics in the ocean, CTV News has reported.

If you’re setting out on your local stretch of the Trans Canada Trail in the coming months and see some work underway, it may be because $55 million is being put into “enhancing” the trail network.

The funding will be allocated to Parks Canada over the next five years, to go into fixing up and improving the 27,000-km recreational Trans Canada Trail network that the government says is the longest in the world.

The federal government is putting millions into science, technology, engineering, and mathematics (STEM) research as well as supporting student fellowships.

After setting aside $45 million in the 2021 federal budget for the pilot program, the government says they’re moving to make the support stream permanent. However, the new funding isn’t set to flow until 2024-25.

The program looks to “provide services and rent supplements to veterans experiencing homelessness in partnership with community organizations.”