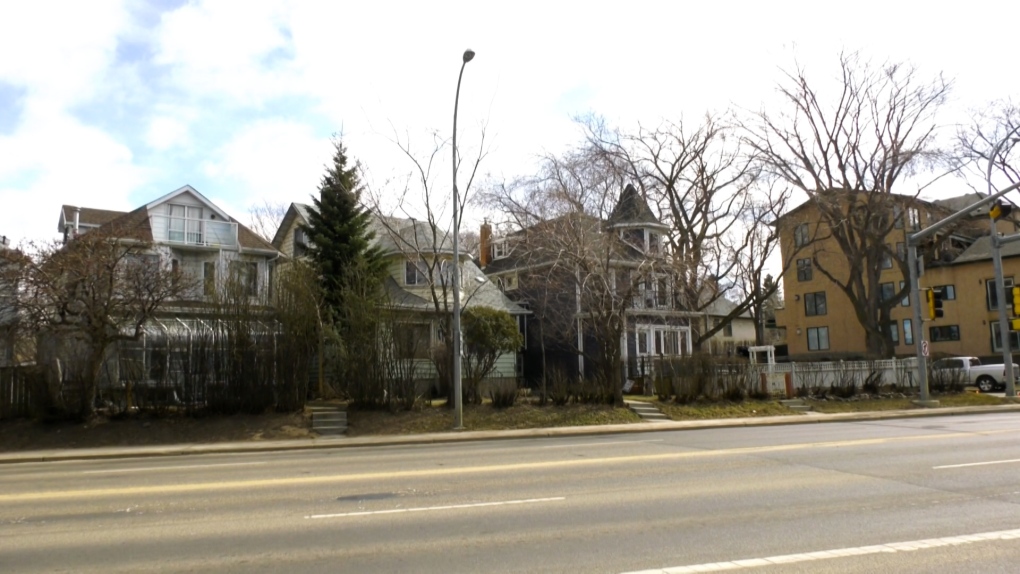 A group of 10 adjacent houses along Scona Road is going up for sale, in a move that often attracts a developer interested in building higher-density housing in the area.

The houses are owned by a small group of people and some are currently rented out as affordable, low-income housing. The listing price for all 10 houses is $12.5 million.

“We actually didn’t find out until we got the news article sent to us by another neighbour, woke up in the morning to it, and we’re like, what the heck is going on,” said Jessica Keith, who lives in one of the houses up for sale.

Some of the houses in the group near 93 Avenue are over 130 years old. Keith said her landlord was recently told that one of the houses was six years away from being condemned.

“There’s so many structural issues with the houses and there’s no way we can fix them unfortunately, just due to age and everything else they have to be completely demolished,” said Keith.

She and her roommate Lexus Harding are sad the century-old homes are being torn down.

“You get to meet some amazing neighbours. It feels like home, it feels like family and it’s going to be weird not to live here,” said Keith.

“To see such a beautiful area demolished and to have so much history… the stories you could tell and the history in these buildings is irreplaceable.”

She added that the house they currently live in was previously used as safe housing for women fleeing abusive relationships.

Properties being sold in groups to a developer isn’t very common in Edmonton, but it could start to be, according to a real estate consultant in Vancouver.

“I predict that in five years as you (Edmonton) slowly start to make better use of your land and support alternative forms of housing… in many instances it will make sense to rezone single-family lots for that purpose,” said Michael Geller.

Due to the mountains, ocean and agricultural land around Vancouver, the city is starting to rezone more single-family homes into higher-density housing, according to Geller.

“When I’m in Edmonton and I drive down arterial or busy streets, I see opportunities where it would make sense to perhaps build townhouses or apartments in that location and the value of the land is greater if that single family lot is used for an apartment building.”

Changes like this require a rezoning permit from the City.

“Often there will be an official community plan which indicated that the planning department and the council are willing to support higher density housing in that area,” said Geller.

He also believes that Edmonton will see low-rise apartments being bought, torn down and turned into high-rise buildings.

“Ultimately, it’s wonderful when the owners can agree and offer their properties for sale… but one of the problems we often have if there’s always one or two people who think if they hold out the longest, they’ll get a higher price than everybody else,” said Geller.

The solution to that, according to Geller, is that developer purchasing the properties follows the favoured nation approach. It means the buyer will pay each owner the same amount they agree to pay the last owner they make a deal with.

“So if that holdout wants too much money, then everybody else may suffer because the developer will not proceed.”

The tenants in the Scona Road houses will have the remainder of their lease honoured and were told they could get a year or more on their lease, depending on how long it takes to sell the properties.