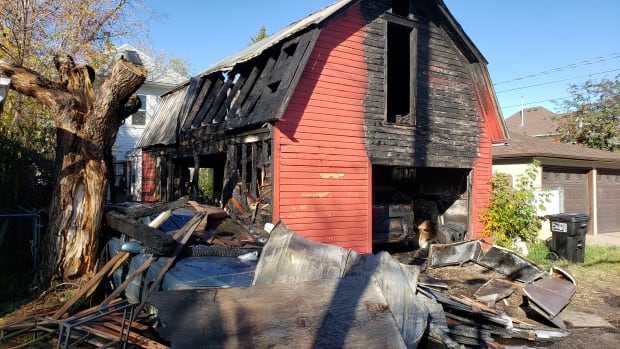 The City of Edmonton plans to get tougher on slum landlords and associated problem properties after city councillors agreed Monday to take stronger steps.

At a community and public services committee meeting, councillors agreed to increase the budget for a community property safety team by $850,000 to expand its mandate for a year and a half.

The team was ready to start a 90-day pilot to take landowners to task — demanding they clean up vacant and unsecured buildings that pose a fire risk to the surrounding community, a city report says. Now the team will have more time to tackle the problem.

Ashley Salvador, councillor for Ward Métis, said the team will be more proactive to get landowners to clean up their properties promptly.

“This work cannot wait,” Salvador said at the meeting. “Even if we start today, it’s going to take time to actually get it rolling.”

Salvador said currently landowners are not made accountable in a timely way, which has led to fires in the community, which is especially dangerous to homeless people using them for shelter.

“A building could be in and out of that unsecured state for quite a long time, which poses a risk not only to folks who might be informally in those places but also to the surrounding community.”

Edmonton Fire Services will lead the team, and deputy fire chief Robert McAdam said they can use the fire code to enforce the law.

There are fire safety code officers dedicated to the team, and they’re also asking the community to help report problem properties, McAdam said.

The city also handles issues with problem properties through its inspection team.

The city’s residential inspection safety compliance team has identified some 480 problem properties since it was formed in 2018.

The committee also agreed to fund the operating budget for the Community Standards and Neighbourhoods branch by $915,000 to enhance resources for problem properties.

Nearly a dozen residents of the Alberta Avenue neighbourhood told councillors some problem properties have been plaguing their area for years.

Jane Samson, a resident of Alberta Avenue for 13 years, said the city could do more to address the issues.

“This is a community in crisis, it’s not just a problem,” Samson said.

Samson said drug houses, gangs and fires are common in the neighbourhood and in the past three or four years have gotten worse.

“I am so tired. It’s every summer, every weekend, shots fired and we all get on our messenger neighbourhood message and we say, you know, are we going to even try to call this one in?”

Christy Morin, with Arts on the Avenue, echoed Samson’s concerns.

“It’s just extremely heavy and a huge burden,” Morin said. “The lightness of being able to go down your street and have your kids ride their bikes isn’t there anymore.”

The city did a case study over three years on 31 properties. Between 2017 and  2020, it cost the city $1 million to inspect properties and costs for police, Alberta Health Services, fire investigations, needle pick-ups, calls to 311, the report says.

Mayor Amarjeet Sohi is adamant the city will do more.

“We should have zero tolerance for slum landlords and we should do everything we can to shut them down,” Sohi said.