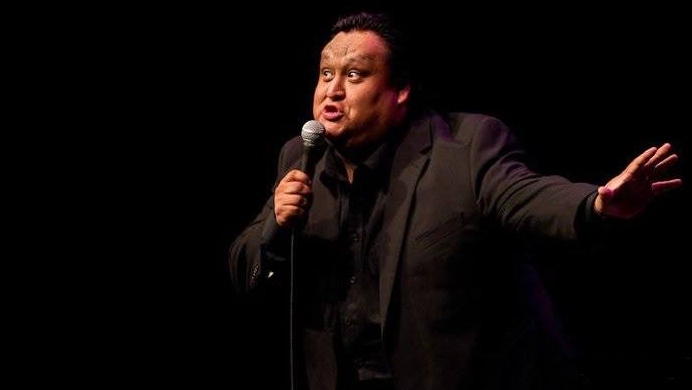 He’s an actor, a comedian and a writer who’s performed at the biggest festivals across Canada, and Howie Miller is also an Indigenous man who is happy to joke around about that.

“You can just call me caucasian-ally-impaired, thank you,” Miller says in one of his more well-known bits.

“I don’t mind being native though, I like the free stuff. You know, like the land, the education, the healthcare. I’m not sure if you’re aware but here in the city I get free cab rides. Well, they’re cop cars, but they get you home.”

After more than two decades of stage, TV and radio performances, the Edmonton-based comedian will release his first comedy album on Friday. It’s called Colonize This.

“If I was going to run for prime minister, that’s the poster I would use,” he said with a laugh.

“It’s the best of Howie Miller, basically, for the last 20 years. It’s something to be proud of and I’m happy to have finally done it.”

The youngest of five kids, Miller started cracking jokes at a young age. His desire for the spotlight became a career, after he made people laugh at an amateur night at the former Yuk Yuk’s comedy club in Edmonton.

“There’s nothing like purposely making people laugh and getting the instant gratification of a room full of people in a comedy club laughing at you,” he recalls.

Since then, he’s taken his act across North America. He hit the road with the Pow Wow Comedy Jam, appeared in the sketch show Caution: May Contain Nuts and popped up on the CBC radio program “The Debaters.”

He jokes about working crappy jobs, relationships and bathroom problems.

He does impressions of people like Donald Trump, Christopher Walken and Sean Connery.

He also pokes fun at himself, his Cree heritage and growing up in a Scottish-Canadian household.

“I was adopted so I didn’t grow up with traditional Indigenous values and ways and knowledge,” he explains. “So I’ve been learning over the years myself about it. And in that, it’s given me the opportunity to kind of be a voice I guess for the ignorant that I used to be.”

Miller has been embraced by Indigenous and non-Indigenous crowds alike. He was named entertainer of the year by the National Indian Gaming Association in 2011 and was nominated for a Gemini Award in 2009.

His “quick wit and unique point of view on multi-ethnic stereotypes is enjoyed by all audiences,” his website biography boasts.

“I get mistaken for other races. I rarely get mistaken for my own race. I literally have to sometimes walk up on stage and do something old school stereotypical like, ‘Woo, woo, woo,’ like this to say, ‘Look, I’m Indigenous. I don’t want you to think that fat Hawaiian was hilarious,” he explained with a laugh.

Miller’s Colonize This album will have 12 tracks and be available on Spotify, Google Play and Apple Music.