The High Level Bridge is unlikely to be torn down and replaced, as the City of Edmonton further steered its plans Wednesday toward repairing and adding pedestrian space to the 109-year-old icon.

The bridge that connects downtown to the Garneau area south of the North Saskatchewan River hasn’t received major repair work since 1995 and requires rehabilitation, costing anywhere from $135 million to $270 million.

Another scenario considered would see the High Level turned into a pedestrian-only crossing with a new bridge for cars built to the west.

The plans continue to be studied and evaluated, but the option preferred by city staff is a 25-year renewal, combined with widening the existing sidewalk on the east side and adding shared-use paths on the upper deck while keeping the streetcar tracks on the top.

Coun. Michael Janz is happy about the bridgetop portion and predicted the spot will become even more popular with tourists and phototakers once work is complete.

“We are going to be able to walk and wheel across the High Level Bridge, which is a dream. It’s so exciting, it’s one of the best panoramic lookouts for the City of Edmonton,” he said.

The new features are estimated to be about five to 10 per cent of the cost, which city officials are still working to pinpoint, said Deputy City Manager Adam Laughlin.

“There’s going to have to be a bridge closure in order to do this rehabilitation, and so you’d miss a tremendous opportunity to complete those improvements,” he explained.

The High Level would be partially or fully closed for up to two years to complete the work. 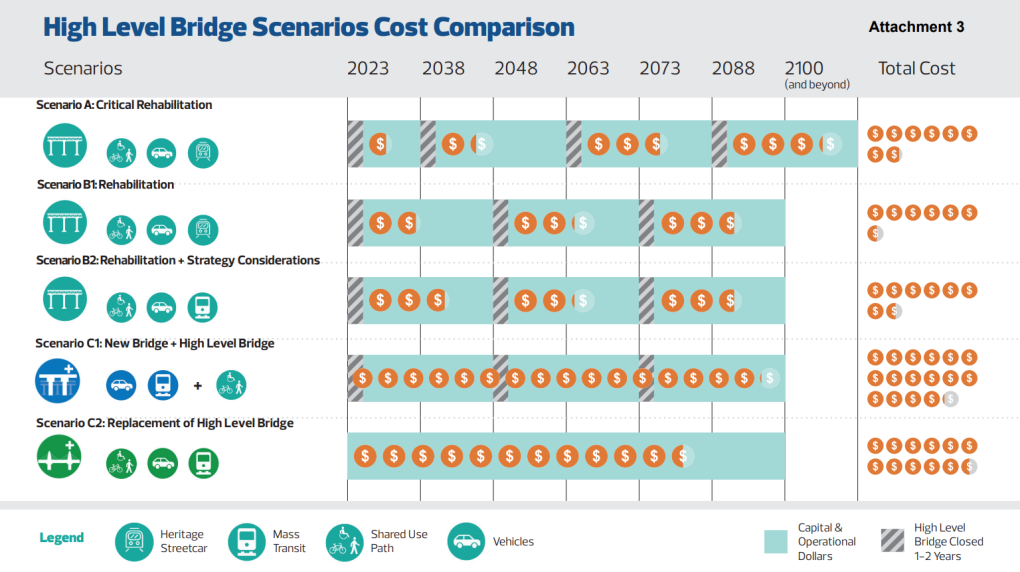 City administrators have recommended Scenario B2 and are planning for that option. (Source: City of Edmonton)

Mayor Amarjeet Sohi called it a “really exciting project” earlier this month and said he does not want to see the High Level replaced.

“We need to look at what we can do to maintain it and keep it in good condition,” Sohi said. “And also keep the iconic look and appeal and the history related to this bridge as well as expand the pedestrian and cycling network.”

A final decision has not been made, as planning work continues. The issue will be back in front of councillors later this year as part of budget deliberations.

The bridge was built from 1910 to 1913. It was originally owned by Canadian Pacific Railway Company and has been designated a municipal historic resource.