Well over 1,000 people attended the event, hosted at the River Cree Resort and Casino, where the Carleton MP made his case to be the next Conservative Party of Canada leader.

Poilievre said the pandemic “attacked” Canadians of medical and personal freedoms, but the rising cost of living is now threatening “economic freedoms.”

“When the people who build our houses cannot afford to live in them, our economic system is fundamentally unjust and needs to change,” Poilievre said. “Conservatives are going to fight tooth and nail to stop the truck tax, to axe the carbon tax, and to leave money in your pocket.”

Considered by many to be the front-runner of the leadership race, Poilievre said he would not only win the contest for the party’s top job but become the next prime minister to return “sound” spending.

“We are going to restore the Bank of Canada’s traditional mandate, which is to keep inflation low and protect the purchasing power of your money,” Poilievre said, adding he would stop federal deficits and introduce “common sense spending rules.”

“We will give Albertans fairness in the equalization system,” he said. “For the national interest, we will unleash the production of the most responsible and environmentally ethical energy anywhere in the Earth, right here in western Canada.”

REACHING OUT TO VOTERS

Laryssa Walker, a public affairs strategist from GT and Company, told CTV News Edmonton that Poilievre’s popular support could stem from his ability to reach voters who have not traditionally felt represented by the Conservative Party. 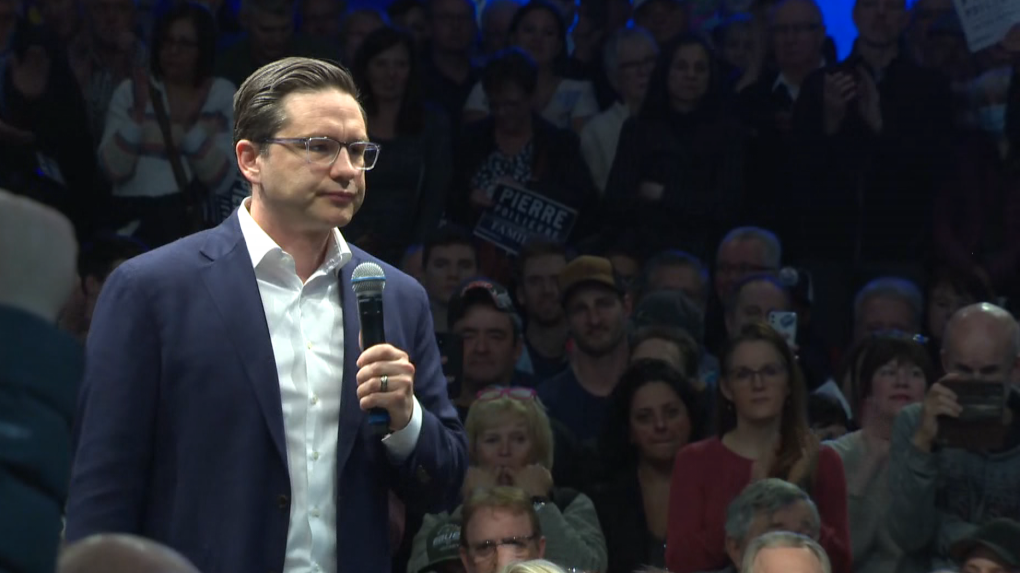 Pierre Poilievre stands in front of a crowd in Edmonton to deliver a campaign speech on Thursday, April 14, 2022 (CTV News Edmonton/Sean McClune).

That messaging is helping his messaging to resonate with audiences that do not usually pay attention to leadership campaigns, Walker said.

“He’s speaking to the person that Ottawa doesn’t listen to or talking about the things they care about,” she said.

“My friends, who are not political, know who he is and care about the things he has to say.”

Poilievre was in Calgary — where he was born and raised — on Wednesday, and campaign officials estimated he drew a crowd of 5,000 to 7,000 people.

A long list of contenders have announced their intention to run, including MPs Leslyn Lewis and Scott Aitchison, former Quebec premier Jean Charest, and the Mayor of Brampton Patrick Brown.

The first English debate is in Edmonton on May 11.

With files from CTV News Calgary’s Tyson Fedor and CTVNews.ca