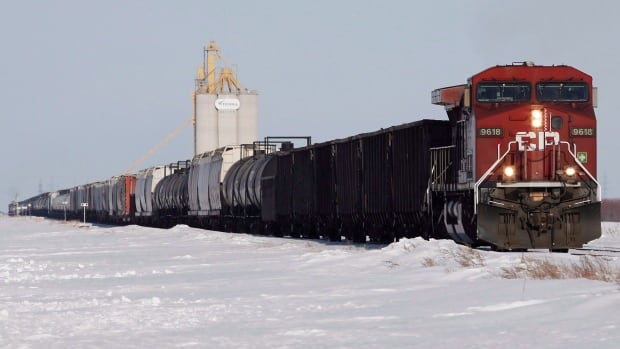 It’s not every day that Canada’s Constitution gets amended.

But that’s exactly what’s happened following a request from Saskatchewan to get rid of a long-standing tax exemption granted to Canadian Pacific Railway.

A senator from Alberta is suggesting her province should pursue the same goal.

The permanent exemption for the CPR’s main-line operations on the Prairies was granted by the federal government in 1880. It was designed as an incentive to get Canada’s first transcontinental railway built.

The exemption was also written into the legislation that created the provinces of Saskatchewan and Alberta in 1905.

The Saskatchewan legislature unanimously passed a motion in November 2021 calling for a constitutional amendment to retroactively remove the exemption.

The Saskatchewan government said that would level the playing field for all businesses in that province while supporting provincial autonomy. The potential tax revenues would be worth millions of dollars annually.

The House of Commons supported the amendment. It was also approved in the Senate last week.

Alberta Sen. Paula Simons, who is with the Independent Senators Group, voted for the amendment. She said the passage of the legislation should send a signal that Alberta could follow.

“Like all Albertans, I’m all prepared to get my dander up at the thought of Alberta not getting a fair deal,” said Simons.

“When Alberta entered Confederation in 1905, we were treated as a second class jurisdiction. We didn’t have control over our resources and we didn’t have this tax power.”

To Simons, it doesn’t seem fair that Saskatchewan has now been given the ability to tax the railway but Alberta cannot.

“Now we have this really sharp difference that in Saskatchewan there’s been a constitutional amendment. The CPR will have to pay taxes along its main line, including fuel taxes,” said Simons.

“And in Alberta, we are left sort of like Cinderella while the sisters went to the ball.”

Simons said she’d be willing to introduce a motion in the Senate to revoke CP Rail’s tax exempt status in Alberta, but she would like to consult with the provincial government first.

In a statement, a spokesperson for Finance Minister Travis Toews said the Alberta government has been carefully monitoring Saskatchewan’s efforts.

“We are pleased to see that their motions have been successfully passed in the House and the Senate. Of course, we welcome a meeting with Senator Simons to discuss Alberta’s options.”

For its part, Canadian Pacific said in a statement the constitutional amendment will not affect how it does business in Canada.

“CP understands the constitutional amendment process and will carefully review the action taken by the House of Commons and Senate, which pertains to the tax exemption for business conducted on CP’s historic main line.

The railway has ongoing litigation in Alberta and Saskatchewan on the taxation issue and says it has a fiduciary duty to its shareholders to protect the company’s rights under its original agreement with the federal government.

‘Sit up and take notice’

A constitutional law professor at the University of Alberta, Eric Adams, said the speed of this amendment has been “arresting.”

“It’s rather a remarkable moment any time the supreme law of Canada is being amended. You have to sit up and take notice,” said Adams.

One wrinkle in this constitutional amendment is that it is retroactive to 1966.

That’s when CP and the Saskatchewan government reached an agreement to have CP pay taxes. However, the railway then filed a lawsuit in 2008 trying to get back some of that money.

Adams said the lawsuits seem to have woken up governments to the idea that a tax exemption granted in the 1880s shouldn’t last forever and another legal remedy is required.

Adams said it’s one thing to amend a constitution and changing the rules going forward. But it’s another to make the change retroactive.

“It may be that even though the Parliament of Canada has approved this constitutional change and put it into effect, there may yet be a constitutional challenge that comes from the CPR about whether this is a lawful amendment,” said Adams.

As this is a limited amendment to the Constitution that affects only Saskatchewan, he said other provinces do not hold a veto over the change.