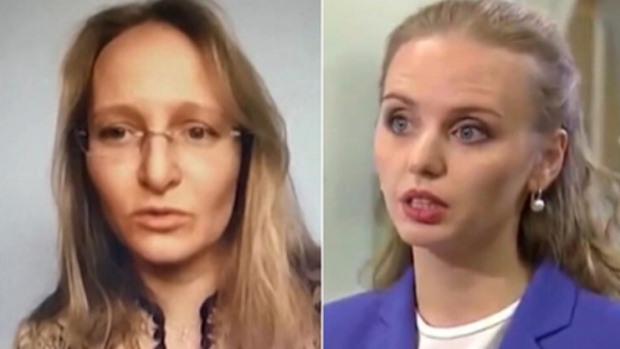 Canada is sanctioning Russian President Vladimir Putin’s two adult daughters, as part of a fresh round of punitive measures aimed at more than two dozen “close associates” of Putin, including Russian oligarchs and their family members.

The pair—Mariya Vorontsova (Putina) and Katerina Tikhonova— are now subject to fiscal and other penalties, as part of a growing list under the “Special Economic Measures Act” that their father is already on.

Putin rarely speaks about his daughters, their identities have never been confirmed by the Kremlin, and neither woman has confirmed publicly that the Russian leader is her father.

The United States moved to sanction the daughters a few weeks ago. Prime Minister Justin Trudeau’s government is following suit, after a host of world leaders met virtually on Tuesday morning to discuss the war in Ukraine.

Mariya is a doctor who, according to the U.S. government, “leads state-funded programs that have received billions of dollars from the Kremlin toward genetics research and are personally overseen by Putin.” Katerina has been described as a “tech executive whose work supports the GoR [Russian government] and defence industry.”

“These actions demonstrate that Canada will not relent in holding Russian President Vladimir Putin and his associates accountable for their complicity in the Russian regime’s invasion of Ukraine,” read a statement from Global Affairs Canada.

At the outset of Russia’s invasion, Canada’s imposition of sanctions were framed as efforts to cut off Putin and his allies from their financial assets, and broadly impose international pressure to end the attacks.

Many weeks later, the attacks continue and the federal government says there is ample evidence that Russian forces are “committing serious atrocities and human rights violations in Ukraine, including war crimes and likely crimes against humanity.”

Pledging to continue with further measures to respond to Russia’s violence and hold Putin accountable, Foreign Affairs Minister Melanie Joly said in a statement that Canada will “continue to impose severe costs” on Russia, who she says “will answer for their crimes.”

With files from CTVNews.ca’s Nicole Bogart