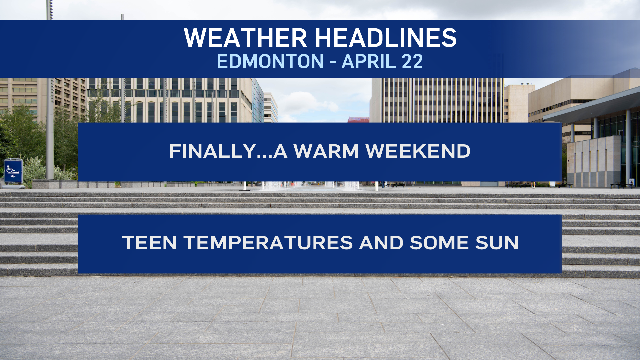 We’re heading into a warm weekend, which is something we haven’t had for a while.

Double-digit daytime highs and light wind for a few days in Edmonton and area.

Sunday’s expected to be breezy. But, today and Saturday should have light wind.

The cooler air that has hung over the province for the past two weeks is finally starting to move off.

Daytime highs were above average for five of the first eight days of this month and the first weekend of April was nice (10 C both days).

Since then, we’ve been cooler than average for 11 of the past 13 days and the past two weekends were CHILLY.

That means there were FIVE weekends in January, February and March that were WARMER than the past two April weekends.

Temperatures should get to around 10 or 11 C this afternoon in Edmonton.

The long-term average high for this time of year is 14 C. So, we’ll only be back to “normal.”

Looking ahead to next week. It appears we’ll have another “blob” of cooler air aloft move in as an Upper Low sweeps in.

That’ll set the stage for some rain turning to snow in central and/or southern Alberta.

Still not a lot of confidence in whether or not Edmonton will get hit with that precip.

I’ll put it at a 40% chance of showers, possibly turning to wet snow in the evening Wednesday. Then, a 30% chance of wet snow early Thursday.

We’ll see how it plays out and have a better handle on it by Monday.

Until then…enjoy the warm weekend.

Saturday – Sunny in the morning. Partly cloudy in the afternoon.

Sunday – Sunny with a few clouds.

Risk of rain/snow mix in the evening and/or overnight.