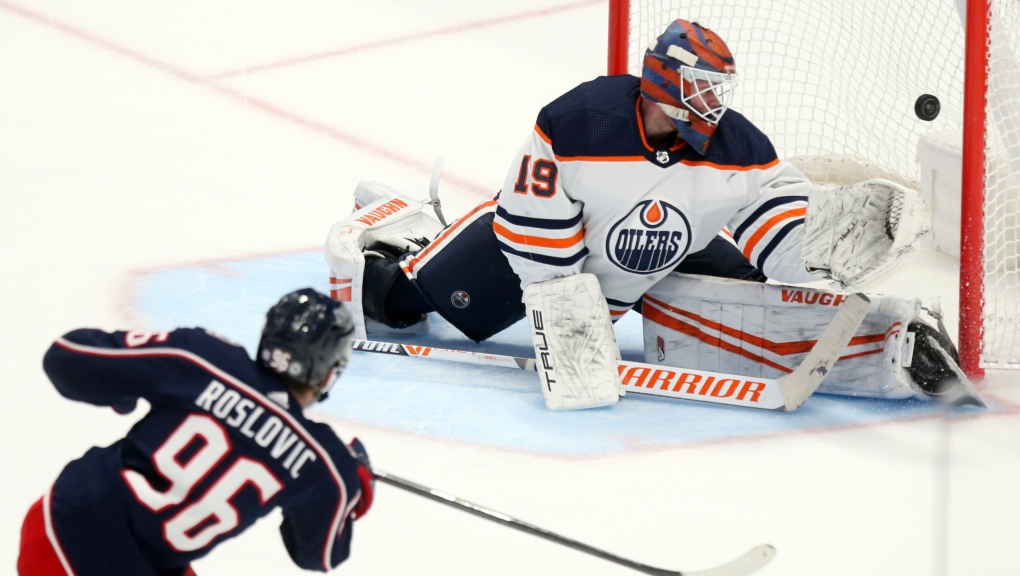 Rookie Nick Blankenburg scored his first NHL goal and added an assist to help the Columbus Blue Jackets beat Edmonton 5-2 on Sunday afternoon, breaking a five-game losing streak and keeping the Oilers from clinching second place in the Pacific Division.

“It’s a dream come true, just to score a goal at home against Edmonton to go up 3-2 with 10 minutes left,” Blankenburg said. “That’s very special for me.”

Eric Robinson and Jack Roslovic also scored, Oliver Bjorkstrand had a goal and two assists, and Cole Sillinger added a goal and an assist for Columbus. Jakub Voracek notched three assists and Gus Nyquist had two helpers for Columbus, while Elvis Merzlikins stopped 33 shots in his 26th win.

“Tonight, our guys battled real hard,” Blue Jackets coach Brad Larsen said. “They are a real dangerous team. Elvis was outstanding. I am really happy for the guys. They put a lot into the game.”

Kane got the scoring started 3:08 into the first period with a sniper shot from the right circle after a turnover in the neutral zone for his fifth goal in three games.

Robinson pulled Columbus even by burying a Voracek rebound with four minutes left in the period.

A power-play at 5:30 of the second opened the door for Draisaitl’s 55th goal of the season – 24th with a man-advantage. McDavid contributed his 75th assist, putting him second in the NHL behind Jonathan Huberdeau, and tying his career season-high.

Columbus pulled even again just 1:36 into the third when Bjorkstrand buried a Cole Sillinger rebound for his first goal since March 29 and his first points in 12 games.

The first goal of Blankenburg’s NHL career, a shot from the blueline during a power-play, put Columbus ahead 3-2, before Roslovic scored from the right circle with about three minutes left in the game for his fourth goal in three games, extending his point streak to four games.

Sillinger’s empty-netter with 47 seconds left made it 5-2.

“We talked before the game that this game was going to be a learning opportunity,” Edmonton coach Jay Woodcroft said. “We learned some stuff. We did generate a lot of offensive opportunities. And on a personal level, we can be sharper. We can be sharper to convert those.

“Their goaltender played very well, that’s the type of goaltending you’re going to see down the stretch and in the playoffs. You have to find a way to be personally sharp.”

THE RACE IS ON

With 118 points, Connor McDavid is in a race with Jonathan Huberdeau of the Florida Panthers (114 points) for his fourth Art Ross trophy as the NHL’s top point producer. Draisaitl is currently second in the Rocket Richard race with 55 goals on the season. He trails only Toronto’s Auston Matthews, who has 58 goals and is on track to become the first 60-goal scorer in the last 10 years.

Yegor Chinakhov returned to Columbus’ lineup after missing nine games with an upper-body injury. Darnell Nurse was out of the Oilers’ lineup after injuring his right leg during the second period Friday against Colorado. Jesse Puljujarvi was out with an illness. Columbus continued to play without Zach Werenski, Patrik Laine, Boone Jenner and Adam Boqvist, all with injuries.

After receiving a minor penalty for roughing against Eric Robinson at 18:28 of the first, the Oilers’ Zack Kassian received a 10-minute game misconduct at the end of the period for abuse of the officials. He returned to the ice with 4:11 left in the second period.

Columbus beat Edmonton for the first time in its last six tries, with the last win on March 27, 2018. It was their record-tying ninth win when trailing after two periods.