Residents of a neighbourhood in Beaumont are raising the alarm after golf balls continue to be launched into their backyards and glance their homes.

Cam Peneff has lived in the Forest Heights area for six years, but his peace was interrupted.

“We’re sitting in the house watching TV one night, and there’s a loud noise,” he told CTV News Edmonton. “Something hit the outside of the house.

Three of his neighbour’s homes have been hit as well, with some shots damaging the siding or shattering glass windows.

“This is where one of the balls came in,” said Andrew Bailey, another nearby resident. “So (we) got some cracked glass and then there’s a little crack in the frame. I haven’t got a quote for what that will cost to repair.”

The families live across the street from the back of Coloniale Golf Club, but the families aren’t blaming daytime golfers.

According to the residents, the balls seem to be launched by a couple of teenagers who use the course after hours. 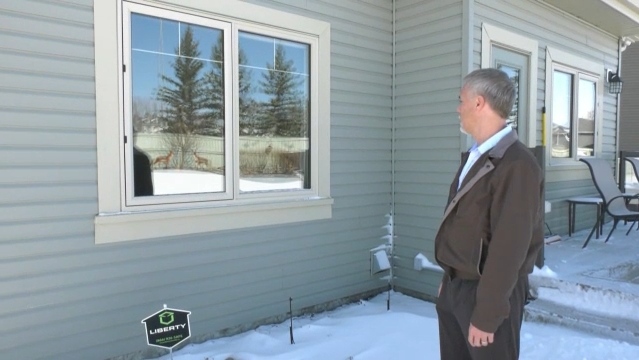 Cam Peneff looks at the side of his house that has been damaged by golf balls (CTV News Edmonton/Alison MacKinnon).

The men have contacted the golf course to see if anything could be done. They’ve also contacted police, who have joined their sting operations.

“They’ve walked the course at night with us a couple times,” Peneff said. “Me and some of the neighbours have sat on the course. We’ve got some stealth stuff. We’ve got some infra-red binoculars and various things trying to catch these turkeys.

While the residents hope to catch the culprits, they’d really just like to be able to feel safe to use their patios.

“Sometimes we sit having a little glass of wine on the deck and if something were to happen,” Bailey said, “it’d be devastating.”

“We both have hot tubs, and we are out in our hot tubs at night, and golf balls sometimes are flying into the backyard,” Peneff said. “Fortunately, no one has been hit.”

Peneff hopes if parents from the neighbourhood hear their plea, they’ll speak with their teens to make sure they’re not to blame.

“We just want it to stop,” he told CTV News Edmonton. “So talk to your kids. Talk to your friends kids. If you think you know someone, talk to them.”

“We just want to be able to use our backyards again.”