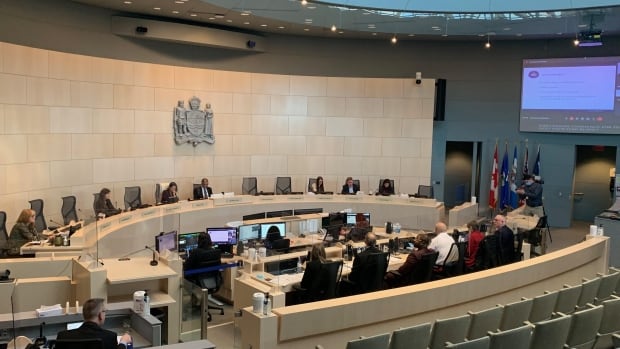 The Edmonton Police Commission and city council say they’re working together to respond to crime and violence in the city.

The two entities met at city hall Thursday, where they discussed a wide range of issues involving policing, including the rise in police-involved shootings and recent violent incidents at LRT stations.

Coun. Keren Tang asked what factors might be contributing to the higher than average number of police-involved fatal shootings in the city this year.

“What measures is the commission taking to address this with the service?” Tang asked.

“I think this is an anomalous blip in shootings in the city,” said John McDougall, chair of the Edmonton Police Commission. “I’m not saying that to minimize the shootings, nor am I trying to say that we need to not focus on them.”

McDougall said as the Alberta Serious Incident Response Team is investigating, neither the commission nor the police service can comment on the specific cases.

He welcomed a $1.4 million increase in its operating budget from the province this year, with which he said he plans to hire five more investigators — three based in Edmonton and two in Calgary.

“I’m confident that we can turn the tide in terms of actually clearing more files than we take on in a given year.”

After an emotional public hearing into policing at Edmonton city hall in 2020, council agreed to redirect some $11 million to invest in community and well-being initiatives.

Thousands of people protested in the city, joining demonstrations around North America after police in Minneapolis killed George Floyd.

Coun. Erin Rutherford wondered where the city commission stands on redirecting money from police to mental health and social services.

“I think the biggest thing we’re going to come to head on this year is around police funding for the next four years,” Rutherford said. “At what point, in commission’s perspective, is that money best dealt with outside of the police service?”

McDougall said they support putting money into an established safety net for mental health, addictions and homelessness issues, but it still doesn’t exist.

McDougall said the commission and police are working out a new social issues strategy, which will factor into the next budget request this fall.

McDougall said it’s important people know they can file complaints to the commission about police behaviour.

Coun. Sarah Hamilton, who also sits as a commission member, said it’s important they communicate better to the public what the oversight bodies do.

“It starts with better understanding of how the current system works,” Hamilton said. “These issues are becoming more pressing in our day-to-day lives.”

The Wrong Side of Goodbye (A Harry Bosch Novel Book 19)