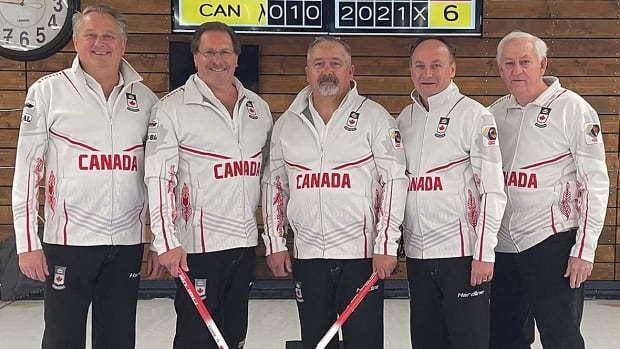 Wade White and his team from Lac la Biche, Alta., picked up their second world senior men’s curling title with a 6-3 win over the Czech Republic’s David Sik on Saturday in Geneva.

The game was even in the early going, with Canada taking a 3-1 lead after four ends when White White made a draw for two with his last shot.

Sik’s crew responded with deuce in the fifth to tie the score, but Canada went out in front again with two in the sixth.

The sixth end could have been worse for the Czechs. Canada sat four after one of the Czech players fell while sweeping, burning a stone.

Sik played a draw on his first shot and a hit on his second to limit some damage. and White capped the end with a draw for two.

Sik couldn’t land a double takeout in the seventh as Canada posted a steal of one point. Up three without the hammer in the eighth, Canada ran the Czechs out of rocks for the win.

‘You could go out on a win like this’

White’s team, which curls out of the Lac la Biche Curling Club, also won gold at the 2018 championship in Ostersund, Sweden.

“I’m a little choked up because, you know, a guy could pack it in. You could go out on a win like this,” White said after the match.

“But this is a good feeling. There were a couple of ends there where things were really even. The ice was quicker, so we slid a couple through the house. But once we caught on to the ice, things went well. I feel pretty damn good over it.”

The Scottish tandem of Eve Muirhead and Bobby Lammie completed their undefeated run through the mixed doubles event with a 9-7 win over host Switzerland in the final. Germany defeated Norway 7-5 in the bronze-medal game.