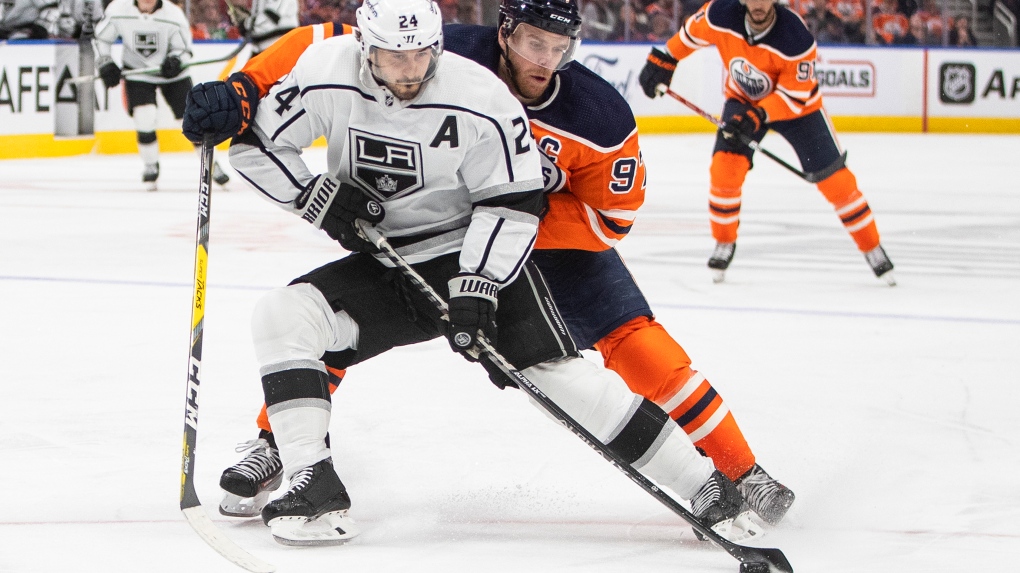 As the Edmonton Oilers prepare for another playoff run, they’re looking to their toughest stretch of the season for strength.

“As much as we want our players to be perfect, our team to be perfect, there are moments that are learning moments throughout a season,” said head coach Jay Woodcroft. “As a coaching staff, we want to capitalize on those moments.

“As much as they’re sometimes not that much fun to go through, we want to take advantage and make sure we do correct some things.”

The Oilers got off to a scorching start to the 2021-22 campaign, winning nine of their first 10 games. But Edmonton stuttered then skidded through December and early January with a brutal 2-11-2 stretch.

Big losses out of the all-star break sealed the fate of head coach Dave Tippet, who was fired Feb. 10. Woodcroft replaced him and the Oilers went 26-9-3 under his guidance.

The new coach has been good at identifying problems and finding solutions, said forward Derek Ryan.

“I think we were searching for that earlier in the year where things weren’t going our way and it just felt like we were being told to work harder and be better,” he said. “We were just searching for more answers and I think Woody has done a good job of bringing those answers in.”

That skill will serve the team well heading into the post-season, Ryan added.

“I think playoffs, specifically, is about adapting, being able to change when the other team changes,” he said. “And I think Jay will be really good at that because he’s shown it so far during his time here.”

The Oilers finished the regular season second in the Pacific Division with a 49-27-6 record. They will have home-ice advantage as they take on the L.A. Kings in a first-round matchup starting Monday.

Game 2 will go Wednesday in Edmonton, with the series shifting to L.A. for Games 3 and 4, starting on Friday. The Kings (44-27-11) surprised many throughout the campaign and finished third in the Pacific.

L.A. is a tight-checking team that doesn’t give up anything off the rush. The Kings are similar to the Winnipeg Jets team that swept Edmonton from the first round of the playoffs in four games last season, said Oilers centre Ryan Nugent-Hopkins.

“I think we’ve grown as a team and learned from that and found ways to get around that a little bit better this year,” he said. “Obviously it’s going to be a tough series, a tight-checking series but we’ve got to find a way to get that extra one or just push a little bit harder.”

The Oilers and Kings haven’t met in the playoffs since 1992 when Wayne Gretzky still played for L.A. Edmonton won that series in six games.

Kings head coach Todd McLellan knows more about the Oilers than most, having served as Edmonton’s head coach from 2015 until November 2019. But he said he’s not thinking about his personal ties heading into the series.

“I’m just happy that our group is getting the opportunity to gain the experience that we all need,” McLellan said. “There’s only three players that are going to put the uniform on that have any significant playoff experience and this time of the year can do nothing but improve our program, our organization moving forward.”

L.A. will be without at least one key piece after star defenceman Drew Doughty underwent wrist surgery last month. The Kings still managed a 7-4-1 record in April, with a stretch of five straight wins late in the month.

“What he’s doing here with this season, I don’t think he gets appreciated by everybody because there’s almost a consensus that ‘Oh, it’s just McDavid being McDavid,'” Woodcroft said. “But he’s had a career high and he’s driving our team, he’s playing the team the right way, he’s driven to win.”

McLellan and the Kings aren’t letting McDavid and the Oiler’s other top talents intimidate them heading into the post-season.

L.A. plays superstars every night in the NHL, the coach said, and they know they’re in for a tough opponent.

“I’d like to think that we have been in class now for 82 games to get prepared for the exam,” he said. “And you know, sometimes exams go really well and sometimes they don’t.

“But we’ve done the work, put in the work and prepared for the exam. So we’re gonna give ourselves a chance.”

This report by The Canadian Press was first published May 1, 2022.