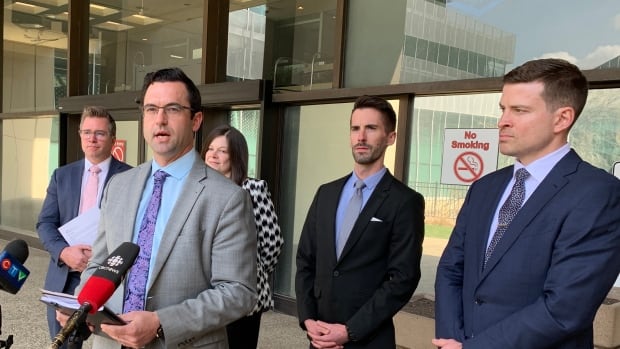 The head of the Alberta Crown Attorneys’ Association (ACAA) believes it was the threat of a possible strike that created a turning point in negotiations with the provincial government.

“Today marks the beginning of a new chapter in our prosecution service’s history,” Sopko said, standing in front of the Edmonton Law Courts.

“Justice Minister [Tyler] Shandro has committed over the next six weeks to enter negotiations concerning a framework agreement that would provide long-term stability for our service.”

He said the ultimate objective is to create a collective bargaining agreement so that the ACAA represents all prosecutors and has a formal mechanism for resolving future disputes.

Negotiations began after the ACAA sent a pointed letter to Premier Jason Kenney in March that included the potential of job action.

“Crushing workload, lack of mental health supports and the inability to attract and retain senior prosecutors,” Sopko said. “The government has acknowledged these shortcomings and is willing to work with us.”

He said those were the key reasons, along with non-competitive pay, that has led to losing senior staff.

A written statement issued by Alberta Justice promises to boost prosecutors’ salaries to bring them in line with other provinces after an analysis of market rates across the country revealed that Alberta prosecutors’ pay was noticeably lower.

“Paying Alberta’s Crown prosecutors a market rate is critical to ensuring that we have the best and brightest on the job conducting criminal prosecutions on behalf of Albertans,” Shandro said in a news release.

The government also suggested additional supports will be explored, including the possibility of providing on-call mental health support for trauma and post-traumatic stress.

Sopko described the mood of his membership as cautiously optimistic. He said the two sides have agreed to work toward developing a framework agreement over the next six weeks.

“The last 50 years have created legitimate doubt in some of our members’ minds about what will ultimately come out of this negotiation,” he said. “It is a substantial commitment, one that no other government in the over 50-year history of our association has made.”

On a scale of one to 10, Sopko said his level of optimism is at seven.

“We’re lawyers, so we’re hard to make happy,” Sopko said. “What’s most promising for us is that the government now understands where we’re coming from and a number of barriers in communication have been removed.”

He added he hopes his mood will be a 10 out of 10 once he has a framework agreement in hand.