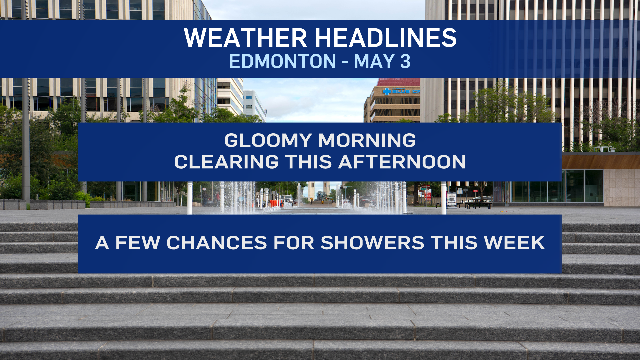 It’s kind of a gloomy start to the day in the Edmonton area.

But, skies should clear this afternoon and temperatures are expected to climb into the mid teens.

We DO have a few spotty showers and some fog patches in the region this morning.

No heavy or steady rain…just a couple scattered pockets of precipitation.

Most of the city and surrounding area gets nothing. But, a few spots will get wet.

And THAT is what we’re looking at for overnight and again late Wednesday.

There isn’t a large system set to move through.

However…there is a little surface trough that’ll sneak across the province overight.

Areas north of Edmonton (Morinville to Slave Lake/Athabasca and then east) have a better chance at seeing some showers overnight.

The Bonnvyille region has a decent chance at seeing some early-morning showers Wednesday.

Partly cloudy skies through the day Wednesday will give way to some increasing cloudiness late in the afternoon as temperatures get close to 20 C.

Again…there’s a risk of an isolated shower near or over parts of the city.

At this point, I wouldn’t be too concerned about it ruining the outdoor party in the “Moss Pit” outside Rogers Place.

But, there might be a brief shower that passes overhead.

Late Thursday looks to be the best chance at seeing some showers this week.

That’s also likely to be our warmest day of the week.

By the weekend, cooler air start to drop in and we’ll be in the 5 to 10 C range for highs Sunday/Monday with a good chance of rain and possibly some wet snow.

We’ll see how that develops. But, most/all of the Sunday precip should be rain. Sunday night/Monday has a decent potential to be wet snow.

Today – Cloudy with a few isolated showers in the area this morning.

Wednesday – Partly cloudy. 30% chance of an isolated shower late in the day.

Saturday – Mostly cloudy. 60% chance of showers or rain starting late in the day.

Sunday – Mostly cloudy. 60% chance of showers or periods of rain.