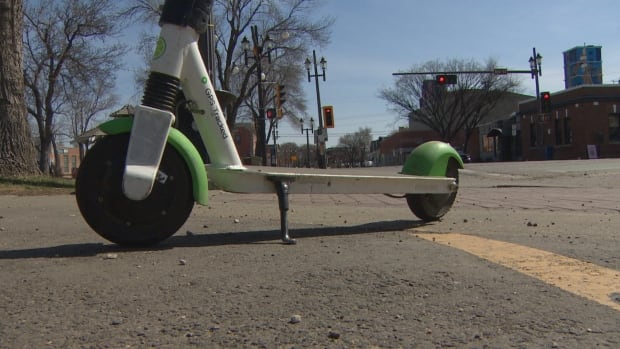 On the sidewalk, doubling up, riding while impaired — Gayle Martin has seen her fair share of e-scooter violations.

The owner of The Wish List Gifts in Old Strathcona has even been hit while stepping out of her shop.

“I was hoping that this last year would have been the last year for them,” Martin said, noting that cities like Montreal have chosen to ban their use.

But despite a late start this year, e-scooters will once again be returning to Edmonton streets — with some changes.

“Each year, we continue to learn and evolve the program to best support active travel options, while maintaining safe streets and sidewalks for all Edmontonians,” Jessica Lamarre, the city’s director of safe mobility and traffic operations, said in an emailed statement.

The city has introduced a competitive procurement process.

Previously, vendors would be granted a licence if they could meet operating criteria. Three companies — Bird, Lime and Spin — operated in previous years.

This year, the city will evaluate and score bidders on different criteria, including proposed solutions to unsafe road use and parking issues.

The number of service providers is also being limited to two. The successful bidders will be chosen this month.

The lengths of the licences has been increased from one year to 20 months to provide more certainty to service providers, Lamarre said.

Last year, there were 4,000 e-scooters on city streets at the start of the season.

Feedback and complaints led to the fleet size being reduced to 1,500 midway through the year.

The city is also allowing each vendor to potentially provide up to 200 e-bikes each.

“This fleet size is based on what Edmontonians are generally most comfortable with and is consistent with fleet sizes with other Canadian cities that offer this program, including Calgary, Kelowna and Ottawa,” Lamarre said.

Puneeta McBryan, executive director for the Downtown Business Association, said when e-scooters were introduced there were numerous issues with them being littered on streets, creating accessibility issues.

“A couple of the operators in the last couple of years were really willing to listen, willing to experiment, adding new features to help with those problems,” she said.

McBryan was critical that the procurement process was still ongoing, saying that e-scooters should already be available by this time of year.

She said the possibility of rental e-bikes should be a major boon to any application. The DBA is supportive of their use as they offer another form of active transport able to travel a greater distance.

“If a provider is willing to bring e-bike stock as well as the e-scooters, that should put them miles ahead of the other vendors,” McBryan said.