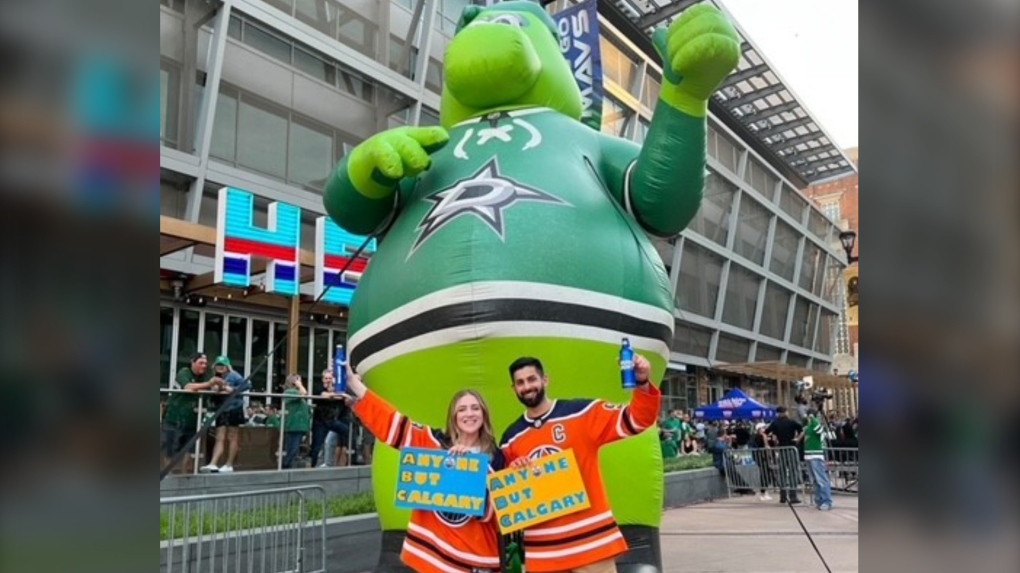 An Edmonton couple in Dallas decided to poke fun at the Calgary Flames as the team took on the Dallas Stars Saturday evening.

Taylor Riar and Allie Larson travelled to Texas to watch the Dallas Mavericks compete in the NBA Western Conference semifinals.

While there, the pair of sports fans decided to purposely go to the Stars game to cheer them on and root against the Flames.

“One of our friends that were sitting with us said, well, you should go to the (Dallas) Stars game and wear Oilers jerseys,” Riar told CTV News Edmonton.

“So we thought, (it) might as well be like a fun thing to do; probably get some laughs from the Dallas fans and Calgary fans might be a little bit upset,” he added.

They managed to find some lower bowl seats at the American Airlines Center and crafted a pair of uniquely Edmontonian signs, saying: “Anyone But Calgary,” and “Calgary sucks.”

The Edmontonians’ stunt garnered a massive reaction on social media, with some even hailing them as “heroes.”

“We went to the Oilers games on Monday and Wednesday last week,” Larson added. “Then the idea was that the Oilers would be on the road anyways, so we would go to the Mavs game while the Oilers were on the road.”

“I guess it kind of popped off more than we thought it would,” Riar said.

According to Riar, Stars fans appreciated the dedication, while some Flames supporters respected the rivalry.

“It was worth it,” he said. “We’ve taken a lot of pictures that we don’t know that we’re in actually.”

“The Dallas fans here are unbelievable, from the Mavericks to the Stars, they’re all super nice people, super welcoming,” he added. “They had a lot of fun with it. Even the Calgary fans that were here, they appreciated the joke.”

“There were a ton of people coming up to us being like, I know someone who lives in Calgary or lives in Edmonton or lives Vancouver,” Larson said, “that would get the joke, so can I take a picture with you?

“So every time we went to get drinks, we had to take like eight pictures before we could get there. It was funny.”