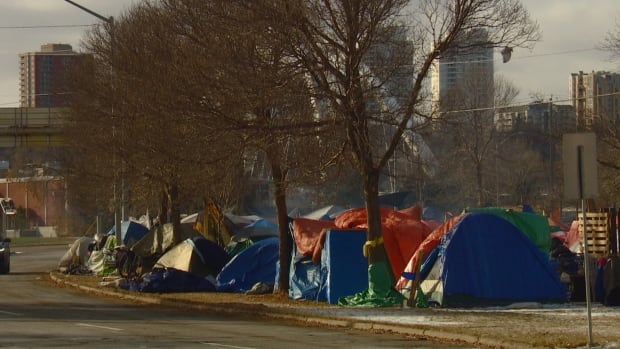 Edmonton is gearing up for a heightened response to homeless camps this summer.

The number of people experiencing homelessness has doubled since the start of the COVID-19 pandemic and is expected to increase, according to a recent city report. The city is now gearing up for its encampment response this summer with a promise to prioritize outreach and supporting pathways to permanent housing.

The city says encampments are currently assessed and removed in a timeframe in accordance with their risk level. That process can take between six and 34 days and will sometimes include bringing in staff from agencies like Boyle Street Community Services or the Bissell Centre to connect.

Potential options for additional funding were presented to council this week, each promising faster timelines and more resources.

Coun. Anne Stevenson made the motion to provide for the lowest cost of the three, the most costly of which was pegged at $5.9 million.

“I’m struggling even with my motion because I know it’s completely inadequate in terms of meeting the needs of folks who are living in encampments right now,” she said.

“At the same time though I do know the impacts that this is having to surrounding neighbours and I think it’s important that we meet their needs as well.”

The money will go toward providing dedicated resources to known hot spots for encampments like Dawson Park and Kinnaird Ravine, evening and weekend supports, and a higher level of encampment clean up and response. Two additional park rangers will be brought on during the summer as part of the schemata presented to council.

Stevenson said it will remove part of the reporting burden from residents. There were more than 6,200 requests last year to 311 and already almost 1,200 calls this year.

Administration said half of the $900,000 slated for an Indigenous-led outreach team — which will go unspent until next year — will also be used for additional outreach staff.

Laura Murphy, president of the Edmonton Coalition on Housing and Homelessness, said it’s disappointing that the city is sticking with the same approach.

“We really do think people need to be ready to meet people where they’re at,” she said. “Continuing to displace people and punish people for self-resolving, when there is no access to adequate housing, we know that’s not working.”

A separate approved motion will require administration to submit regular memos to council through the summer on homeless population supports and activities.

An interim report was also ordered, gathering engagement with both people neighbouring encampments and  experiencing homelessness. It will also provide a summary of findings from research and opportunities related to housing as a human right.

Murphy said it was encouraging to see more discussion around including the perspective of people experiencing homelessness and addressing the issue as a human right. Information gathered by administration might also improve the city’s response, she said.

“It’s an opportunity to really understand more about the things that are happening and how we can address and make different decisions sooner.”

The city has a number of initiatives underway toward that end. In February, council approved $4.8 million to extend existing bridge housing to the end of 2022.

The $860,000 will come from COVID funding in the financial stabilization reserve, which was recently boosted from $66.9 million in joint federal-provincial funding for municipalities suffering lost transit revenue during the pandemic.

About $1.9 million went to cleanup and park rangers while partner agency funding was calculated at $792,000, which included specialized outreach to reduce drug overdoses for people sleeping rough.