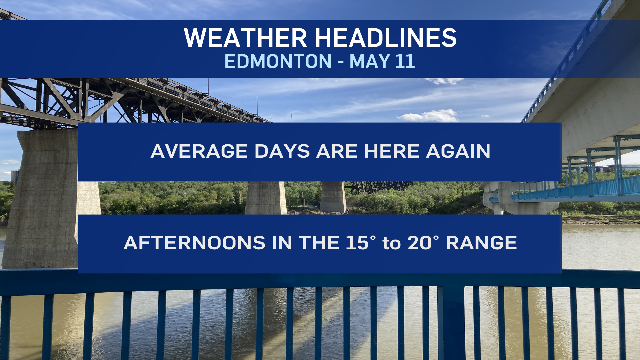 The cool spell is over. After three straight days with highs in single digits, we’ll be back to average this afternoon.

Temperatures should get to around 16 C in Edmonton under partly cloudy skies.

Light wind for most of today, as well.

There’s a bit of instability at play in central and north-central Alberta.

So, we’ll see some scattered showers and possibly one or two thunderstorms develop this afternoon and/or early this evening.

That’s where a bit of wind might come into play as we could see some gusts develop around those cloudbursts.

It gets a bit closer to 20 C tomorrow afternoon in Edmonton. Again…we’re looking at partly cloudy skies for most of the day with just a slight risk of a brief shower late in the day.

Friday could be interesting. There’s a massive area of low pressure moving north into Saskatchewan and Manitoba, bringing heavy, steady rain to those areas.

I don’t usually spend much time looking at a system way off to the east of us. But, this one will probably have an impact on us.

There’s a decent chance we get some showers spit off WAY OUT on the west flank of that broad system.

We’ll see how that develops in the coming days.

Weekend looks good. Sunday will definitely be the warmer of the two days.

Highs in the mid/upper teens Saturday and 20/21’ish C for Sunday.

There’s a SLIGHT risk of a shower midday Saturday, but I’m leaving it out of the forecast for now.

Let’s just wait another day or two before getting too excited about that.

Today – Partly cloudy. 40% chance of a shower this afternoon.