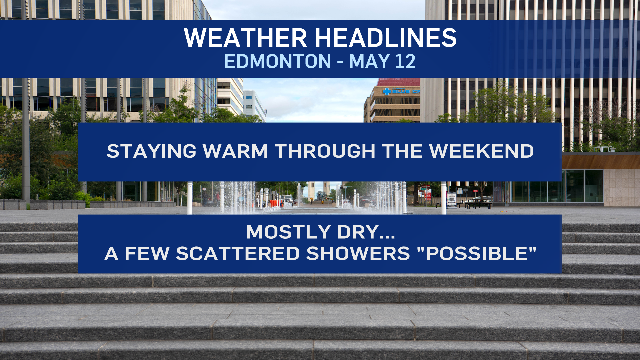 There’s no runaway warming trend in the forecast or legitimate HEAT.

But, temperatures WILL hit highs in the 16 C to 21 C range through the weekend and into Monday.

After that, a decent chance of rain Tuesday/Wednesday and (as a result) cooler temperatures.

That’s a ways off though, let’s focus on the more immediate future.

Sunny skies this morning will give way to some afternoon cloud in the Edmonton area.

There’s a chance of a shower in the area this afternoon. But, any showers that develop should be fairly localized.

Parts of the Edmonton region had a bit of rain late Wednesday, while much of the city got nothing.

It’ll be a similar situation this afternoon.

Areas just north of Edmonton and in east-central AB have the best chance at seeing some showers.

There may even be one or two lightning strikes.

Friday’s shaping up to be cloudier and a degree or three cooler.

We’re still expecting some showers to get shoved east-to-west across the province off a massive area of low pressure over Saskatchewan/Manitoba.

Temperatures will depend on if/when we get some of the precip (it’s possible, but not a guarantee that your backyard will get wet)

Morning clouds Saturday will clear off in the afternoon and we’ll be in the mid to upper teens for a daytime highs.

THEN…right around 20 for highs Sunday/Monday in Edmonton.

30% chance of a shower late this afternoon.