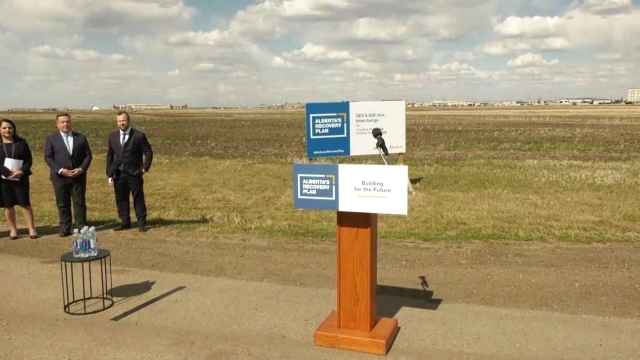 The mayor of Leduc refused to take questions on the lawsuit against the city’s fire department on Thursday.

The press conference was held to announce a new interchange on the QEII in the Leduc area.

Premier Jason Kenney, Minister of Transportation Rajan Sawhney and Leduc Mayor Bob Young were just a few of the officials present at the event.

When the formal portion of the press conference was over, a reporter asked Mayor Young a question about the lawsuit.

“This just isn’t the venue to be discussing this, you’ll have to contact me at a later time, thank you,” Young said as he walked away from the podium.

“Respectfully, sir, I’ve asked your media people for an interview, and nine times out of 10 I get a statement, so I’m wondering if the amendment changes do anything to change how the city plans to respond?” the reporter replied.

At that point, there was a brief silence, and the moderator ended the event.

“Thank you for your questions, that concludes our press conference.”

On Thursday, Leduc’s former fire chief was named in a class action lawsuit involving allegations of sexual assault, misconduct, and discrimination within the department for years.

The former chief, then in the capacity as deputy, allegedly pinned down and kissed a former female firefighter.

“We’ve heard from a number of women from across the province and received quite a bit of new information from them,” said Robert Martz, lawyer with Burnet, Buckworth & Palmer LLP.

The new allegations date back to December 2005, when Deputy Chief George Clancy allegedly walked into former female firefighter Christa Steel’s office to say, “you have pretty lips and attempted to touch her face and neck.”

Clancy then allegedly “proceeded to pin her against the wall and attempt to kiss her neck against her will.”

The document, over 33 pages in length, outlines claims by more women, including the first allegation made by an employee outside of the fire department.

In the document, a woman referred to as “T.L.” worked in the city’s operations department. She alleges another co-worker “sexually assaulted her by coming up behind her and grabbing her between her legs.”

She claims she tried to come forward with the allegations only to be told “she should keep her opinions to herself.”

“The statement of claims alleges several instances of intimidation,” Martz added. “And those are the types of things we say that could be preventing other women from coming forward.”

Another woman named ” A.M. ” in the suit alleges she was on night shift when a deputy chief forcibly kissed her. Rick Sereda was chief at the time of this assault, and others, the suit alleges.

“Sereda took no steps to address issues of discrimination, sexual misconduct, and sexual assault despite being aware of them,” the suit says.

A LinkedIn page shows Sereda is now working as the director of public services at the city.

Leduc’s city manager said in a statement that city administration and council are aware of the new claims, adding, “we cannot comment on the allegations outlined in the statement, as this is a matter now before the courts.”

The lawyer representing the plaintiffs expects the application will be heard by early fall.

None of the allegations have been proven in court.