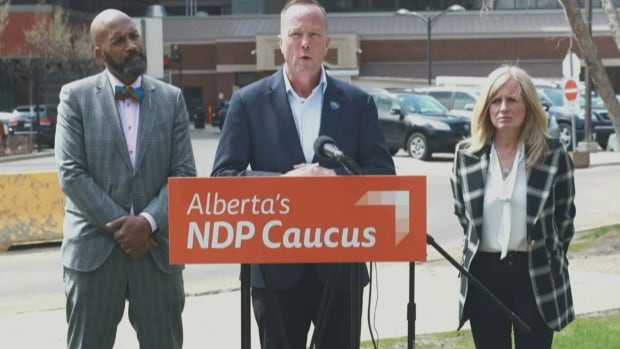 The union that represents paramedics who work for Alberta Health Services wants the government to offer casual paramedics full-time jobs to help solve a worsening shortage of ambulances in Alberta.

Mike Parker, president of the Health Sciences Association of Alberta, says giving new hires regular shifts is one immediate solution to a problem he says is the result of two decades of under-funding the health-care system.

He said there are currently 300 empty seats in ambulances.

Parker, who appeared with NDP Leader Rachel Notley at a news conference in Edmonton Tuesday, said 40 per cent of the Emergency Medical Services (EMS) workforce are casual employees and don’t receive benefits.

“You want to fill the seats?” Parker asked. “We have the people. Offer them full time.”

Casual paramedics made up 31 per cent of EMS staff, as of April of this year, according to AHS.

An AHS spokesperson said the health authority had hired 70 temporary staff last summer and funding has been extended for another year. AHS hired 230 paramedics over the past two years.

Funding of $64 million is coming to add new ambulances in Alberta, with $14 million going toward a project to address fatigue among EMS crews.

The data shows ambulance response and dispatch times and times crews waited at hospitals with patients increased in the first three months of 2022.

For example, the provincial target for dispatch times is when 90 per cent of calls are dispatched one and a half minutes from the time of the 911 call.

The time increased to two minutes and 45 seconds in the last quarter.

“All of these numbers are clear signs of an ambulance and a hospital and a health care system that is under incredible strain,” Notley said.

“I hear from EMS and emergency room professionals every day, and they tell me that they are worked to exhaustion. They are burned out.”

In addition to hiring casuals into full-time positions, Parker wants AHS to ensure paramedics finish their shift on time without resorting to regular overtime, and to restore safe consumption services to reduce calls about drug poisonings.

At a news conference Wednesday, Health Minister Jason Copping acknowledged the increased volumes of calls for service and stresses on the system.

He said an advisory committee, of which Parker is a member, is set to issue an interim report later this month. He is open to hearing recommendations that the committee agrees on that can be implemented quickly, make a difference and not hurt safety.

“Let’s try them out,” Copping said.