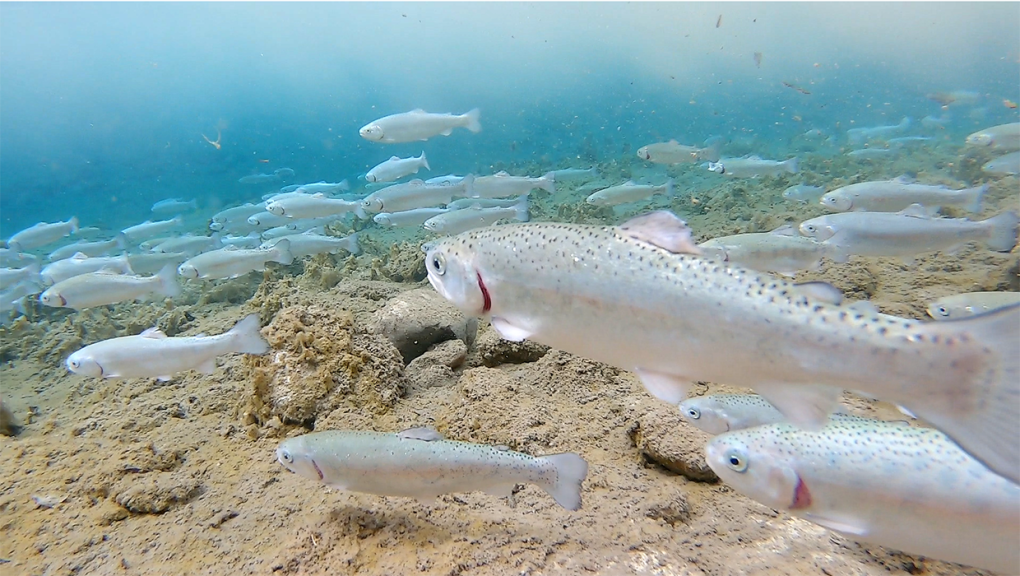 Nearly 200 ponds and lakes around Alberta are currently being stocked with more than 1.3 million fish that began their lives indoor in tanks in the province’s hatcheries.

It takes ten months for a fish to grow from an egg to a catchable size of 20 centimetres in length at either the Sam Livingston Fish Hatchery in Calgary or the hatchery in Cold Lake in northern Alberta.

Fisheries technician Shawn Berube drove a truck loaded with tanks of rainbow trout to Mount Lorette Ponds. The annual pilgrimage made from the Sam Livingston Fish Hatchery to Kananaskis country occurs once the surface ice melts and water becomes oxygenated.

“Once ice starts coming off the lakes in usually about mid April, that’s when our season starts for stocking,” said Berube. “Then we go usually until mid-June.

“We try to get the fish out of our hatchery before the water warms up too much.”

It takes seconds to open a valve and release hundreds of rainbow trout and this year, the stocking of the Mount Lorette Ponds included an audience.

Grade 7 students from an outdoor education class at Airdrie’s C.W. Perry School watched on alongside their teacher Michael Dow. He says the stocking is a great opportunity for the students to learn and it fits with the class motto, ‘hooked on fishing but anchored in the environment.’

“Just try to make them more sensitive to the environment,” explained Dow. “Hopefully make stewards for the future so that they can be those advocates for making sure that the future holds places like this still.”

Since opening in 1973, over 50 million trout have been raised from egg to fry at the Sam Livingston Fish Hatchery.

“We do raise some other trout species,” said Lyster. “Like brook trout, tiger trout, brown trout and cutthroat trout and then as part of our program provincially, we’re also raising spawning walleye to be stocked out in certain lakes at a really small size.”

The hatchery makes sure the water temperatures in the facility are close to the lake where the fish are being released so as not to shock them but help them thrive.

“We pay really close attention to water quality, and generally to the health of the fish,” said Lyster. “So, for stocking fish, we’re putting them out there for anglers to catch and obviously we  want to be stocking a nice, healthy fish into the water bodies.”

To learn more about the fish hatchery and the Alberta Biodiversity Festival being held May 14 visit Bow Habitat Station.