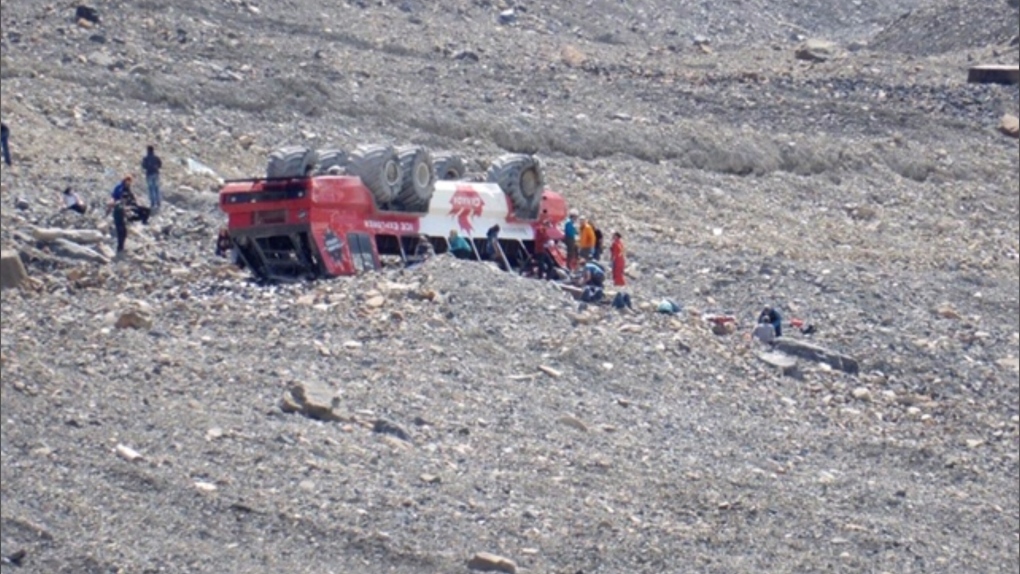 The provincial government announced that the company offering tours of the Columbia Icefield faces eight charges under the Occupational Health and Safety Act relating to the fatal July 2020 rollover.

On July 18, 2020, an offroad Ice Explorer tour bus lost control on the road leading to the Athabasca Glacier and rolled down an embankment, killing three passengers and injuring 14 others.

According to Alberta OHS, the charges were officially laid against Brewster Inc. on Tuesday in connection to the “serious incident,” including three counts of failing to ensure the health and safety of passengers by not controlling the hazard of the “slope of the lateral moraine.”

The matter is scheduled to be heard on June 23 in Jasper provincial court.

The alleged OHS violations have yet to be proven in court.

If convicted, fines up to $500,000 for a first offence could be levied against the company, imprisonment, corporate probation, or other creative sentences. Fines for subsequent violations can be up to $1 million and all fines under the OHS Act are subject to a 20 per cent “victim surcharge.”

Alberta RCMP say the criminal investigation into the incident has concluded and that prosecutors are reviewing the material to see if charges are warranted.

“The RCMP will provide a further update to the victims and families in an updated media release when further information about the outcome of the criminal investigation can be shared,” police said.

Two civil lawsuits have been filed on behalf of the 27 people who were on board the tour bus.

Tours using Ice Explorer vehicles resumed at the Columbia Icefield last summer. The tour provider confirmed to CTV News at the time that seatbelts were added to the fleet and that changes were made to driver training and road and vehicle maintenance.

Pursuit Collection, the company operating the icefield tours and the Jasper skywalk, said in a statement to CTV News that it could not comment on the specifics of the case.

“We continue to support a transparent and multi-agency investigation into this tragic accident,” said Tanya Otis, a company spokesperson.

The Columbia Icefield is located approximately 100 kilometres south of Jasper, Alta., and is one of the largest non-polar icefields in the world.