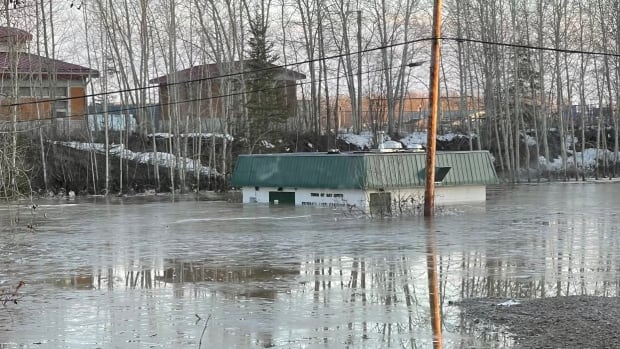 As the Hay River crested its banks this week and surged through properties, homes and streets, it washed away the 2 Seasons Adventures’ campsite.

Campground owner Kathy McBryan said her house, which is built above the 100-year flood line and up on six-foot pylons, is still intact, but it doesn’t have power, heat, sewer or other utilities.

The rest of the campground — 100 sites, a general store, event centre, cabins and yurts — are gone.

“We were able to access our property yesterday before the next surge came through, and there’s nothing,” McBryan said Friday morning.

The flooding that hit Hay River and the Kátł’odeeche First Nation reserve is the worst flood in memory, coming after ice jammed up on the river during breakup.

“Hay River right now, is in a state of shock,” she said.

The only thing they can do is rebuild.

“We’re resilient,” she said. “We’ll just hike up our boots and figure out, when everything recedes, what’s left and go from there.”

Jordan Wheeler, a teacher at the Diamond Jenness Secondary School, went to Enterprise when his neighbourhood began to flood.

CBC Newfoundland Morning6:52Hay River, NWT is experiencing its worst flooding in decades. We’ll hear from a Newfoundlander living there who’s been forced out of his home

A Newfoundlander living in Hay River has been been forced to leave his home because of what locals are calling the worst flooding there in decades. Jordan Wheeler has been teaching in the Northwest Territories for three years. On Wednesday night, the entire community was told to evacuate. But Jordan Wheeler has been out of his home since last Friday, when water began to rise in his neighborhood.The CBC’s Cherie Wheeler reached him yesterday in Enterprise, a small community 30 kilometres south of Hay River.

On Thursday, Wheeler said it was great to see surrounding communities rally to take in those fleeing the floods.

He said when the town’s evacuation order came down Wednesday night, there was “pandemonium in the streets” as people hurried to gas up their vehicles and leave town.

“It was really surreal for our town,” he said.