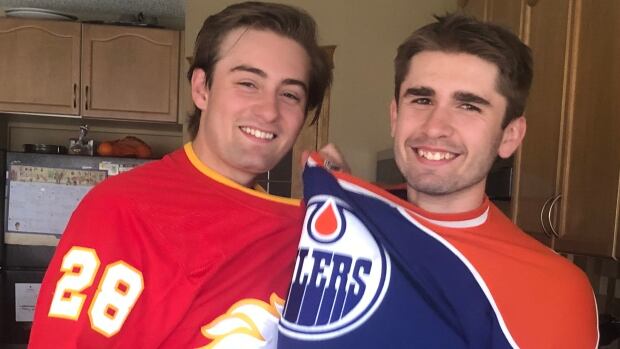 The Battle of Alberta is sparking a lot of rivalries across the province as fans get set for Game 2 of the Edmonton-Calgary series, and in some cases those rivalries run deep in families within the same household.

Consider brothers Mark and Douglas Henri, who live in the northwest Calgary community of Royal Oak with their sister, mom and dad.

The whole family cheers for the Calgary Flames, except for Mark, who is an Edmonton Oilers fan.

“It’s pretty hard. My entire family — that includes my aunts and uncles — none of them are Oilers fans,” said Mark, 19.

“I would be the oddball here.”

Mark’s older brother, Douglas, says he’s learned to tolerate the fact that they don’t sport the same colour of jerseys or wave the same banners.

But that doesn’t mean it’s been easy for the 21-year-old Calgary Flames fan.

“Never have we played each other in a playoff series,” said Douglas. “There’s a lot more at stake, especially in the house because if anyone were to lose, it would be inescapable.”

The family has a theory about how Mark started rooting for the Oilers, which he has been doing since as long as he can remember.

Apparently, Mark and his father cheered for Edmonton during the team’s 2006 Stanley Cup run.

Afterward, Mark continued to be a fan — even when his father didn’t.

“I can’t really explain why, and I’ve thought about it, too,” said Mark.

The two have watched Battle of Alberta games in the past, during the regular season, with some harmless trash talk. But now that their two respective teams are facing each other in the Stanley Cup playoffs, they have decided to bite their tongues and implement a few ground rules.

“We got a peace treaty going on right now,” Douglas said.

For one, no more watching games together.

And there’s no talking about the games — at all — until the series is done.

“So we don’t end up killing each other by the end,” said Douglas.

So what happens at the end of this series when only one team advances?

Will Mark support the Flames, or vice versa?

Not likely, say the brothers.

“I guess it kind of depends how it ends,” said Douglas, “I don’t know that I will be cheering for Edmonton, but it’s not like I’ll root against them unless it goes a certain way — and then I might.”

“I won’t, especially since they would have beat the Oilers. Maybe on another year,” said Mark.

That’s one of just a few things these two can agree on — with respect to hockey.

They also agree that the goaltending needs to tighten up.

And that it’s been an exciting match up so far — with all the goals, hits and even a fight.

“I think a lot of people in Alberta, if it keeps going this way, will at the end of the series go, ‘Hey, at least it was a great series,'” said Douglas.