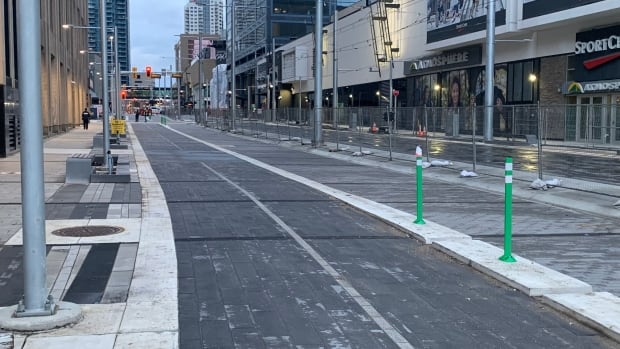 A main corridor in downtown Edmonton could become more pedestrian-friendly, at least on a temporary basis, if a proposal to convert part of 102nd Avenue into a walking lane gets the nod from city council.

On Tuesday, council’s urban planning committee agreed the city should pilot the proposal to turn the eastbound lane of 102nd Avenue, normally designated for vehicles, into a pedestrian walkway between 99th and 103rd Streets.

That portion of 102nd Avenue has been closed for Valley Line LRT construction, but the city plans to reopen the lane to vehicle traffic.

Coun. Ashley Salvador championed the move and in a motion, asked for the city to look into the pilot as soon as possible.

“I think we are in need of spaces in our downtown for connecting and interacting and moving and spending time,” Salvador said during the meeting.

Cities around the world have benefited from pedestrianized streets, Salvador suggested, with more foot traffic and people shopping at local businesses and organizations.

The committee agreed the city should prepare a bylaw to allow them to close the traffic lane during a one-year pilot project.

The move needs approval from council as a whole, which meets next week.

At council’s direction last December, administration explored the opportunities to pedestrianize 102nd Avenue along the Valley Line LRT, which it presented in a report to committee.

Converting the traffic lane to a pedestrian zone would require even more construction along 102nd Avenue.

Parts of the avenue have been closed for more than three years for LRT construction, so some establishments aren’t keen about the proposal.

“It has been significantly frustrating for members, participants and for staff,” Bittorf told the committee.

The YMCA is asking the city to stick with the plan to reopen the avenue to traffic again.

“As we rebuild and people start to come back to the downtown I guess what we’re recommending it’d be nice if people could return to what they were used to prior to COVID.”

Bittorf also said there has been an increase in social disorder while the avenue has been closed.

“We see active evidence out in that space — without vehicles or traffic — of individuals in the morning camping out, using the area as a washroom,” he told councillors. “It’s just been our experience.”

Coun. Aaron Paquette supports the pilot, in part to find out how people would respond and whether they would spend more time at local businesses like cafes and restaurants.

“I’ve heard way more from the public about maybe trying this out rather than just having cars go down that street, where families might be crossing from Churchill Square to the library,” Paquette said.

With the Valley Line Southeast LRT scheduled to open this summer, Salvador said she thinks the timing is perfect, even for drivers.

“Recognizing that the lane has been closed to traffic for several years, drivers are used to navigating the downtown according to those patterns,” Salvador said. “Folks are coming back downtown, the LRT is about to open.”