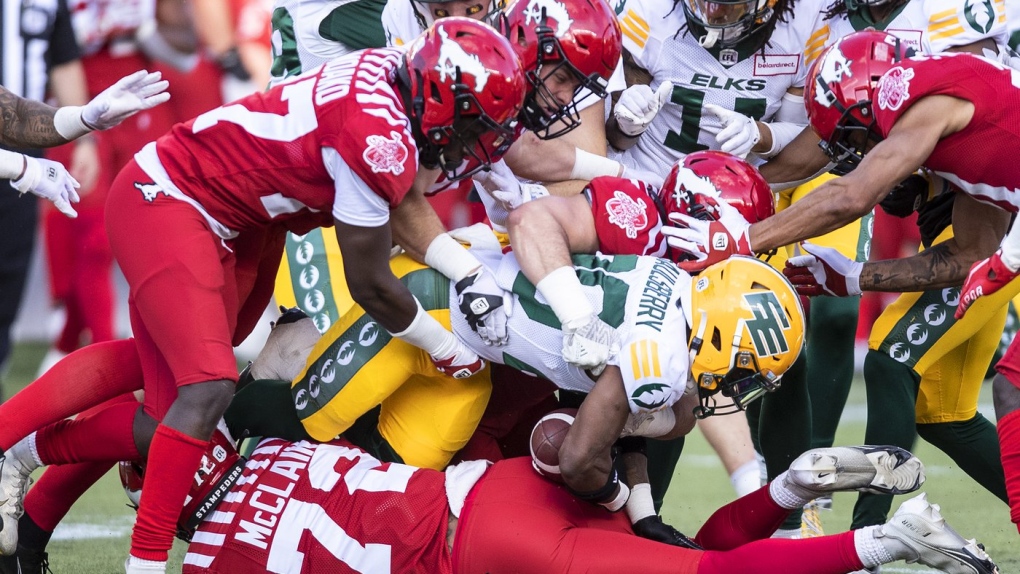 Dedrick Mills had two touchdown strikes as the Stampeders improved to 2-0 in pre-season play Friday night with a convincing 37-7 victory over the Edmonton Elks.

Despite those two lopsided wins, Stampeders head coach Dave Dickenson still feels his CFL team is very much a work in progress.

“I think we’ve got a lot of improving to do. I don’t really feel like the score’s indicative of what’s going to happen next week at all,” he said. “I think you’re going to start seeing real close games again and having to win in the fourth quarter. We’re going to try to focus on winning those last three minutes of every game and if we do that I think we’ll get quite a few wins.”

The Elks dropped to 1-1 in exhibition action.

“Well, it wasn’t very good,” said Elks head coach and general manager Chris Jones. “They had too much ability to run the football, we had no ability to run the football, which is very disappointing because we want to be a physical football team and, certainly, we were not on either side of the line of scrimmage tonight, offensively or defensively.

“Special teams, it was about as bad as I’ve ever seen. We get a punt blocked, we drop a snap, I mean, just thing after thing. And I just talked to the coaches, this is indicative of us

“We’ve got to do a better job of bringing our A-game and when we step into this building, our effort level’s got to be way higher than that. I don’t care if it’s a pre-season game or not.

Calgary got on the scoreboard first, early in the opening quarter, as a punt block by George Obinna eventually led to a one-yard touchdown plunge by quarterback Tommy Stevens.

The Stampeders struck on their second possession as well, getting a 32-yard field goal from Keiran Burnham.

Calgary added to its lead with five minutes left in the second quarter on a five-yard rushing major from Mills, putting the Stamps up 17-0 at the half.

Edmonton started the third with a single off a missed field goal.

Mills got his second touchdown of the game shortly after, breaking for a 67-yard gain to set up a three-yard rush into the end zone.

There was a lengthy delay midway through the third as Edmonton defensive lineman Kingsley Opara was injured and required an ambulance.

The Stampeders went up 27-1 with three minutes left in the third when a Malcom Lee interception led to a 41-yard field goal by Burnham.

Calgary’s assault continued to start the fourth as QB Chase Fourcade found Juston Christian in the end zone for a 27-yard TD.

Edmonton finally got a significant score with six minutes left in the game as quarterback Kai Locksley took it in on a two-yard sneak for an unconverted TD.

The Elks were 0-7 at home last season.

The Stampeders launch the regular season next Thursday when they host Montreal. The Elks are in Vancouver to face the B.C. Lions next Saturday.

This report by The Canadian Press was first published June 3, 2022