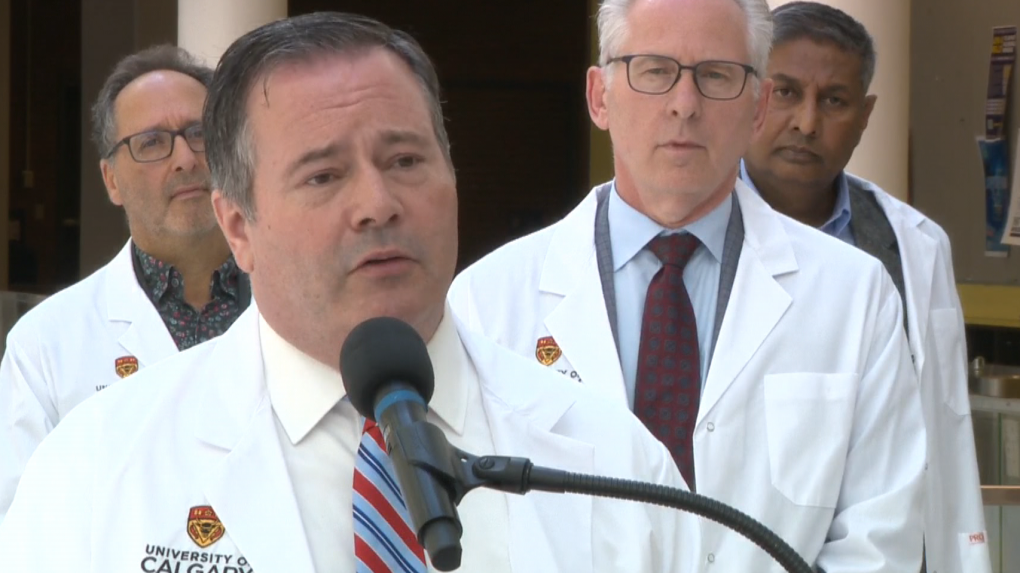 Alberta’s premier took a shot at Edmonton City Council Thursday after the province received the “public safety plan” that it demanded.

“I’m glad to see that Edmonton has begun to listen to its citizens,” Jason Kenney said when CTV News Edmonton asked about the report.

On May 26, Justice Minister Tyler Shandro invoked the Police Act to demand the report from Mayor Amarjeet Sohi within two weeks.

At the time, Shandro expressed concerns over a police budget debate and accused Sohi and his council of “not providing or maintaining adequate and effective policing services.” His comments came after a series of violent crimes in the core including the beating deaths of two men in Chinatown.

Kenney specifically applauded a Wednesday decision to tighten city bylaws against loitering and drug use on transit.

“There have been far, far too many violent crimes committed while innocent citizens are just waiting to board their bus or LRT,” Kenney said.

The 31-page plan outlines a number of actions that councillors are already working on to improve safety, including redistributing police and peace officers to crime hotspots, creating a new EPS operations centre in Chinatown and amending transit bylaws.

The unsigned city document also asks for more from Alberta.

“Municipal governments have neither the jurisdiction nor the resources to address houselessness, mental health crises, addictions issues, and criminal justice procedures,” it said.

The letter calls on the UCP government to increase a police funding grant, adopt minimum shelter standards, provide permanent funding for more shelter spaces and limit the number of pharmacies in Chinatown.

‘STEPS IN THE RIGHT DIRECTION’: SHANDRO

Shandro declined an interview request with CTV News Edmonton, but also expressed satisfaction with how Sohi and council have responded to his letter.

“I am encouraged by the constructive discussions I’ve had with Mayor Sohi and the recent steps municipal officials have taken to improve public safety for Edmontonians – including city council’s vote to amend the municipal transit bylaw to ban loitering and drug use on public transit,” Shandro wrote.

“There is still a considerable amount of work to do to address crime and violence in downtown Edmonton and make it safer for everyone, but these are positive steps in the right direction.”

Kenney was asked about what his government planned to do to increase safety in the capital but he didn’t offer any new initiatives. The premier did point out that “a lot” of violent crime in Edmonton “relates to addictions crisis and mental health issues.”

“We have provided increased support to the municipal police services and we hope the city will take it as serious as Edmontonians want them to,” Kenney said.

The city’s report also outlines a plan to work with the province to redistribute social agencies from Chinatown and downtown to other areas of the city.

“A more equitable distribution of social services – both across communities within Edmonton and across the greater metropolitan region – can increase access to services for people who need them, and potentially reduce the impacts of their concentration on neighbourhoods,” the report states.

Sohi is scheduled to speak to reporters at 2 p.m.