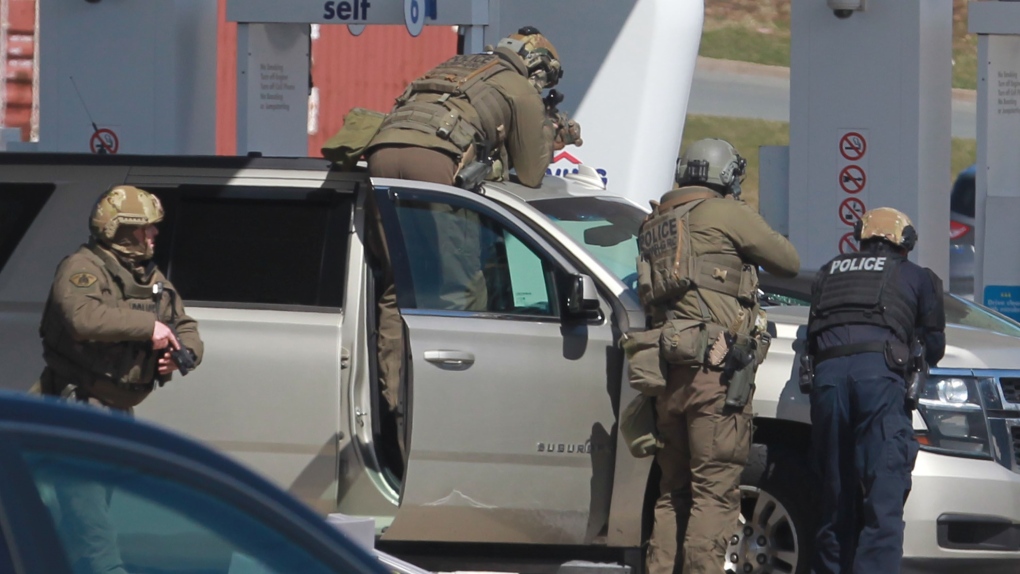 Videos of Nova Scotia RCMP officers fatally shooting the perpetrator of one of the worst mass killings in modern Canadian history have been released to the public.

The decision Monday from the commissioners of a public inquiry into the 2020 Nova Scotia mass shooting reversed their previous decision to shield the videos from publication.

The five videos from various security cameras at an Irving Big Stop gas station in Enfield, N.S., were recorded when RCMP officers killed the gunman on April 19, 2020, ending a 13-hour rampage that claimed 22 lives.

One of the videos shows the arrival of the Chevrolet Suburban driven by RCMP dog handler Const. Craig Hubley, who opens his car door next to the pumps about 28 seconds after the killer had pulled up.

The constable in full body armour appears to draw his sidearm within a second of opening his front door. He begins shouting before firing repeatedly into the gunman’s side window.

Hubley’s pistol recoils as he fires and moves toward the front of the gunman’s car. Const. Ben MacLeod, an emergency response team member who was riding with Hubley, has meanwhile exited the passenger side of the vehicle, moved around the front of the police vehicle and fired his carbine into the front window of the killer’s vehicle.

The shooting of the killer, Gabriel Wortman, begins shortly after 11:25 a.m., and is over within seconds.

In testimony before the inquiry in April, Hubley said his suspicions were aroused when he noticed a man in a car at a pump across from his police SUV who seemed to be unaware that blood was running from a bump on his head. He said a single glance confirmed that the man was Wortman, whose photo he had burned into his memory that morning.

Both Hubley and MacLeod testified they started shooting when they saw Wortman raise a gun with his right hand.

Another video, recorded from behind the Mazda hatchback the killer had stolen from his final victim, shows the moments before the police arrive.

As the officers arrive, the gunman’s right hand is seen apparently reaching for an object, though it’s difficult to see what it is.

There is a brief rocking motion within the Mazda, and then, an instant later, a hail of bullets coming from Hubley shatters the Mazda’s side window. MacLeod’s carbine volley comes within seconds and make multiple holes in the front window.

The five videos were made public by the Mass Casualty Commission accompanied by a warning about what they depict.

The commissioners wrote in their decisions that they initially decided to post only stills from the footage because of its potential to re-traumatize those affected by the mass shooting, but several media outlets challenged the decision.

“We urge the public to bear in mind that every time the photographs and videos associated with the mass casualty are discussed or reported upon in a public forum, the people depicted, and their families, are affected, and for some it is retraumatizing,” the decision says.

In the video that shows the windows of the Mazda shattering, there is also footage of other emergency response team members arriving within six minutes, smashing the driver’s side window and pulling the body of the killer onto the pavement, where they surround him and briefly examine him.

This report by The Canadian Press was first published June 20, 2022.