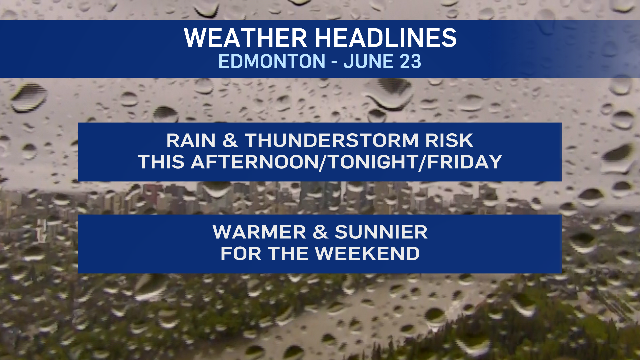 The coming weekend looks sunny and warm for the Edmonton region.

Today and Friday….uuhhhhh….not so much.

We have rainfall warnings in effect for areas south of Edmonton and it’s entirely possible that we’ll see the city get added to that before the end of the day.

Regions under the warning can expect 40 to 60 mm of rain by midday Friday.

That doesn’t really seem like an unreasonable precip estimate for the city. Although, if I had to make an educated guess, I’d probably go with an 20-50 mm estimate.

We have some sunny breaks in the Edmonton region this morning that’ll give way to cloudy skies and rain this afternoon, tonight and Friday morning.

Parts of the region (particularly southern and western parts) may see some scattered showers this morning. But, I think the steadier rain probably holds off until later today.

We also have the risk of some thunderstorms in and around the Edmonton area.

AND…the folks over the Prairie and Arctic Storm Prediction Centre have included a risk of funnel clouds in their outlook for today.

We’re not anticipating severe thunderstorms producing tornado(s) in the region today. But, a funnel cloud or two is possible.

Further east, the risk of severe storms is much highs in east-central Alberta and areas near the Saskatchewan border have conditions that could potentially produce a tornado.

So, keep an eye on the sky and the forecast if you’re in the Wainwright-Coronation region.

The heavier, steadier rain in Edmonton is expected to fall through the late afternoon/evening/overnight.

Then…I think it’ll taper off through the morning hours Friday but may not be completely out of the area until sometime Friday afternoon.

Temperatures will be on the cool side of 20 C today and Friday. Highs should be in the 15 to 18 C range.

By Saturday, we jump back into the low 20s and we’re into the mid 20s Sunday afternoon.

Here’s the forecast for Edmonton and area:

Cloudy with showers and a risk of a thunderstorm this afternoon.

Tonight – Periods of rain. Risk of a thunderstorm.

Friday – Cloudy with periods of rain in the morning. Rain ending in the afternoon. Clearing late in the day.