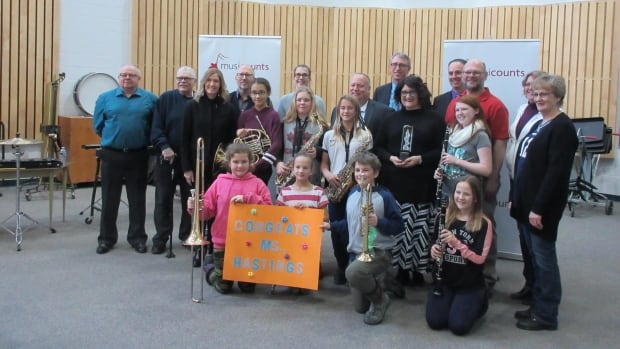 A music teacher from Rocky Mountain House, Alta. is being recognized at this year’s Juno Awards.

Kim Hastings was nominated by parents for the MusiCounts Teacher of the Year Award.

She qualified for the nomination after successfully applying for a $10,000 grant for instruments.

Hastings said her husband, principal and superintendent knew two weeks before she found out. They came up with an excuse to get her out of the classroom and when she returned they  “surprised the heck” out of her.

“I went back in and the room was filled with parents and students and school board and cameras,” Hastings recalled.

Hastings has been teaching at Pioneer School in Rocky Mountain House for 27 years, where she said the band program really stands out.

Hastings will be presented with her award by musician Jann Arden on March 16th. The awards ceremony is on March 17 on CBC Television.

The MusiCounts Teacher of the Year Award aims to “recognize and honour exceptional music teachers who strive to preserve the livelihood of music education in their school and community.” The award was established in 2005.

According to the Wild Rose School Division, Hastings has served on the Alberta Band Association and resurrected the MUSICOM magazine in her ongoing advocacy for music education.

She has received a number of awards including Most Outstanding Junior Concert Band at the Alberta International Band Festival South four times and three gold awards from MusicFest Canada.