Breaking News
Eskimos sign running back and kick returner Terry Williams
Not your average porch pirate video: Thief caught by police within seconds
10 things to do in Edmonton this week: Skirtsafire, Girl Brain, and Da Camera Singers
‘Do what is necessary’: Kenney hints at investment in major oil and gas project
25 Feb, 2020
Skip to content 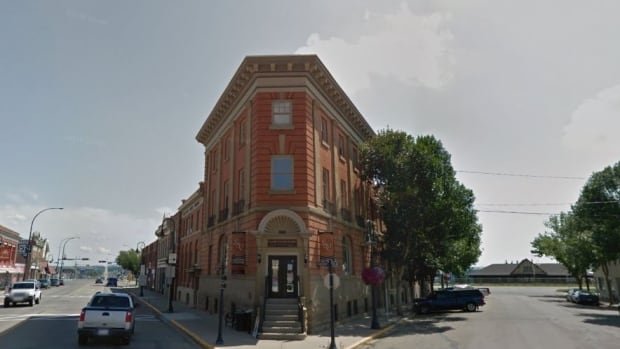 Lacombe’s landmark Flatiron Building is on the market.

The fully restored, triangular-shaped heritage property, which has stood over the central Alberta city’s Edwardian-style downtown for more than a century, has been put up for sale with an asking price of $1.3 million.

An “exorbitant” amount of money and labour of love has been invested in it, Hellofs said.

“It’s beautiful,” Hellofs said.  “It’s in pristine condition. It was in disarray when [the owners] bought it back in 2000 and it is immaculate.

“This is a rare opportunity for someone to live in this iconic landmark.”

The commercial building has been on the market since late July, Hellofs said.

“There has been some interest,” Hellofs said.  “There are people looking at the listing. It’s definitely for a unique buyer … it’s for someone who has a love for heritage.”

The building, the oldest of its kind in Alberta, was constructed in 1904. It served as the Merchants Bank of Canada until 1922 when it became the Bank of Montreal.

Today, the building is privately owned and operated as a rental space. Lacombe Regional Tourism occupies the basement and main floor. Lacombe and District Historical Society operates a public heritage exhibit in the space. The upper floors house a penthouse rental suite and additional office space.

“It’s the type of building that wasn’t built very frequently and there aren’t a lot of them left. It’s really a gem.”

Lacombe has one of the best preserved Edwardian-style streetscapes in Canada, Kirchner said. Several buildings constructed in the early 1900s have manged to survive.

The Flatiron Building and the city’s historic downtown have made appearances in films, television shows and photo shoots over the years.

“It really dominates 50th Avenue,” Kirchner said of the building. “It’s such a unique architectural shape that just stands out in Lacombe, but also on a larger scale.”

Hopefully whoever buys the building next has the same love for it.– Jennifer Kirchner

Society volunteers fear they will be evicted from the building once the property comes under new ownership, Kirchner said. There is no guarantee the new owners will be interested in housing the non-profit, she said.

“It’s been a really great space for the public to be able to access and I think it would be a little sad if it changed into a use that was more private,” she said.

“We’re sad that the history of the current owner is coming to an end but hopefully whoever buys the building next has the same love for it.”

Provincial investment in oil and gas may be needed in changing investment climate, Kenney says