Breaking News
Edmonton weather: Saying goodbye, and good riddance, to March
Staying cold all week, but heavy snow is done: This is your Edmonton forecast
‘He didn’t get a death sentence’: Living in fear of COVID-19 behind bars
Young father identified as northern Alberta’s first fatal case of COVID-19
31 Mar, 2020
Skip to content

Washington’s warning to Canada to not miss the next deadline in the renegotiation of the North American Free Trade Agreement is starting to sound at this point like a boy crying wolf.

Several deadlines have been blown already. The talks continue.

The latest warning came Friday from White House economic adviser Kevin Hassett, who told Fox News that President Donald Trump’s administration was “a little puzzled” about why negotiators hadn’t yet closed the “very good deal that was designed by Mexico and the U.S. to appeal to Canada.”

“We’re getting very, very close to the deadline where we’re going to have to move ahead with Mexico all by themselves,” he said.

That deadline — Oct. 1 — is next weekend. Last week’s talks failed to make a breakthrough, and it’s not clear when officials might meet again. Might another deadline come and go without a deal? Should Canadians be alarmed if it does?

It certainly wouldn’t be the first time. In May, negotiators put on the steam to reach an agreement in time for the current U.S. Congress to vote on it.

It didn’t work. The U.S. turned up the heat and stopped exempting Canada and Mexico from the global steel and aluminum tariffs it levied to protect the “national security” interests of its domestic industry.

Then came some secret summer brinksmanship: the U.S. and Mexico met alone for nearly the entire month of August, reached a preliminary agreement, and then expected Canada to sign on within a couple of days.

No dice. Congress was notified a deal had been reached that Canada could join as talks bled into September.

The U.S. Congress needs to see text 60 days before Trump would be authorized to sign anything with outgoing Mexican President Enrique Peña ​Nieto, who leaves office on Dec. 1.

People familiar with drafting trade agreements say they suspect that because nothing was decided this week, it’s already too late — the key players just aren’t admitting it publicly.

“Whether Canada is in or out, either way, you can’t get the text done by Sept. 30,” said Jennifer Hillman, a former U.S. trade official and adjudicator, now a professor at the Georgetown Law Center.

The August agreement was premised on Canada joining, and it would need a drastic overhaul before the United States and Mexico could proceed as a twosome. “I just don’t see how that’s realistic,” she said.

Plus, Congress is expecting a renegotiated NAFTA, not a two-way deal, Hillman said. 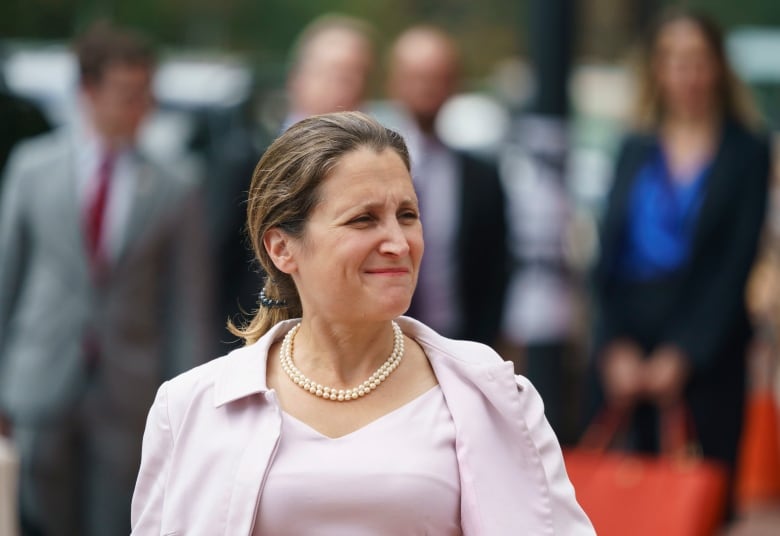 Foreign Affairs Minister Chrystia Freeland told reporters this week that her office has received notes of encouragement and gifts of flowers and chocolate from Canadians grateful to negotiators for standing up for them at the NAFTA table. (Carolyn Kaster/Associated Press)

Yes, some Republicans loyal to Trump are warning Canada to get with the program, but “what you’ve mostly heard from the Congress is, ‘Don’t you dare do a deal without Canada,'” she said.

At the same time, it’s still all just talk.

“So far, this Congress has been completely spineless,” said Hillman.

Couple that with an impatient, unpredictable president, and there’s rough road ahead if a last-minute deal doesn’t land soon.

Yes, Congress could intervene to stop the president from withdrawing from NAFTA. Others might go to court to hold him back as well.

And yes, the automotive industry’s dire warnings about car tariffs could be taken seriously, to the point where the Commerce Department decides not to proceed with them (or to at least exempt Canada and Mexico).

But if you’re in Justin Trudeau’s government, you’re thinking it’s pretty stomach-churning to count on American politicians and business interests right now — with the fall midterms bearing down and with the urge to stage some attention-grabbing drama running high in American political circles.

So what happens if another deadline is blown?

“My assumption is that the negotiations can keep going,” Hillman said. “To ask Canada to sign on in just three weeks strikes me as a little bit unfair.”

The process that was started at the end of August has a 90-day minimum time frame, but “there is no maximum,” she pointed out.

It helps Canada’s case that it appears to be working hard toward a deal, she said.

As for the outgoing Mexican president, there’s nothing preventing him from signing an agreement early, if a bit more time is what it takes to land a deal.

“Lots and lots of treaties are not all signed in the same place at the same time,” Hillman said.

In the meantime, the three nations have a deal in effect that (apart from the steel and aluminum tariffs) keeps North America’s trade tariff-free. That’s the ‘pro’ of the status quo.

The ‘con’ is that those damaging steel and aluminum tariffs, and the threatened car tariffs, could do serious economic damage if the current situation drags on.

(U.S. allies are arguing they’re illegal before the World Trade Organization — an adjudicator quickly becoming hobbled by a lack of American co-operation.)

Today <a href=”https://twitter.com/KenSmithramos?ref_src=twsrc%5Etfw”>@KenSmithramos</a> explained why MX took gamble of agreeing to a 2.4 million auto export quota if Trump enacts 232 tariffs:<br>•”We dont think (232 tariffs) would survive for long”<br>•”No (US) Administration lasts forever”<br>•”This (armor) covers (exports) for at least next 4 yrs” <a href=”https://t.co/yahmUop6NU”>pic.twitter.com/yahmUop6NU</a>

From Mexico’s perspective, the threatened car tariffs —  for which it obtained “insurance” in a side letter — are far scarier.

From Canada’s viewpoint, both the existing metals tariffs and the possible car tariffs are a nightmare.

“It’s like leaving a loaded gun on the table,” said John Manley, the former Liberal foreign affairs and finance minister who now heads the Business Council of Canada. “We’ve already seen that they’ll pick it up and point it at our heads.”

Trump’s too unpredictable, Manley said. “I am cautiously pessimistic that there’ll be anything that comes out of this that looks like a deal, or that’s good for Canada.”

Both Hillman and Manley agree a deal takes flexibility on both sides.

Americans accuse Canada’s negotiators of “slow-walking” and dragging out the talks.

“I’ve seen more evidence that the U.S. negotiating team does not negotiate, but simply makes demands,” said Manley, whose organization is closely monitoring the talks.

Only the fly on the wall knows for sure who’s not budging, or whether both sides are being stubborn.

Flowers and chocolate for Freeland

The Canadians may prefer not to make unpopular dairy market concessions this week, in the final days of Quebec’s election campaign.

And standing tough against Americans can be politically popular.

Foreign Affairs Minister Chrystia Freeland, who chooses her words carefully, revealed to reporters this week that supportive notes — even gifts of flowers and chocolate — are arriving at her office to thank Canada’s team for hanging in against the perceived bullying of Trump’s team.

“I used to say there were two rules in Canadian politics: don’t get too close to the U.S. and don’t get too far from the U.S.,” said Manley, who guided Canada’s relationship with Washington in the difficult days following the 9/11 terrorist attacks.

“No politician could look at that without thinking, ‘I wonder if there’s some way I can be running against Donald Trump in the next Canadian election?’

“It would be surprising to me if the prime minister and his team aren’t thinking that already. But at the same time, we have vital national interests at stake.”

‘He didn’t get a death sentence’: Living in fear of COVID-19 behind bars