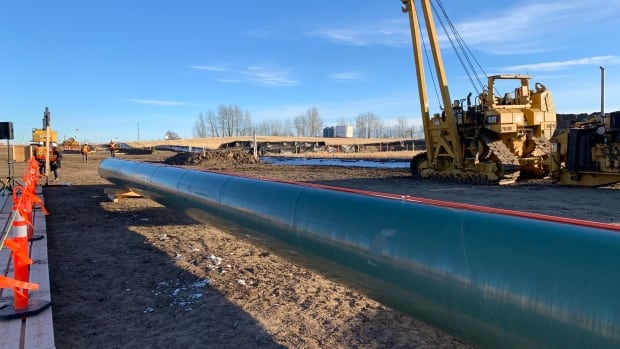 Expansion of the Trans Mountain oil pipeline accelerated on Tuesday, just two weeks before a court hearing in British Columbia that could decide whether Prime Minister Justin Trudeau’s government can complete the project.

The proposal to nearly triple Trans Mountain’s flow of crude to 890,000 barrels per day is one of three by the industry to
expand pipelines to U.S. refineries from Alberta, where existing pipelines are congested.

TMX, as the project is known, moves crude to the British Columbia coast, where some shipments may reach Asian markets.

Canada is the world’s fourth-largest crude producer, but struggles to get new export pipelines built due to opposition from environmental activists that has forced the Alberta government to curtail production and prompted an exodus of foreign investors.

Federal and Alberta politicians on Tuesday marked the start of a new phase of construction near Edmonton, involving work along the pipeline’s right-of-way.

“Encouraged to finally see pipe going in the ground,” Alberta Premier Jason Kenney tweeted. “There’s a long way to go, but this is good news and an important step forward.”

After a legal delay, work resumed in late summer near Edmonton and in Burnaby, B.C., where the pipeline ends, in hopes of putting the project in service by mid-2022.

“Perseverance has got us to this point,” Savage said Tuesday in a statement. “When others were criticizing our energy industry and the value of future pipelines, Albertans did not waver. That’s why our government has been tireless in our advocacy for the Trans Mountain pipeline expansion project and why we’ll continue to engage the federal government to discuss Alberta’s priorities and challenges.”

Grand Chief Stewart Phillip of the Union of British Columbia Indian Chiefs, who opposes the project, said there is still substantial opposition to the TMX project.

“What we’re witnessing is a lot of self-serving posturing,” Phillip said.

The Federal Court of Appeal is scheduled to hold a three-day hearing in Vancouver starting on Dec. 16. The hearing will consider challenges by six indigenous groups who say the Canadian government did not sufficiently consult them on the project.