Breaking News
One month in: Looking back at how Alberta has handled COVID-19
‘Elk poop on every sidewalk’: Animals take over main street, a sign of Banff’s ‘decimated’ economy
Application process for emergency benefits for workers begins this morning
Might NHL revive 2020 playoffs in a tournament format in the COVID-19 world? Elliotte Friedman floats North Dakota solution
06 Apr, 2020
Skip to content 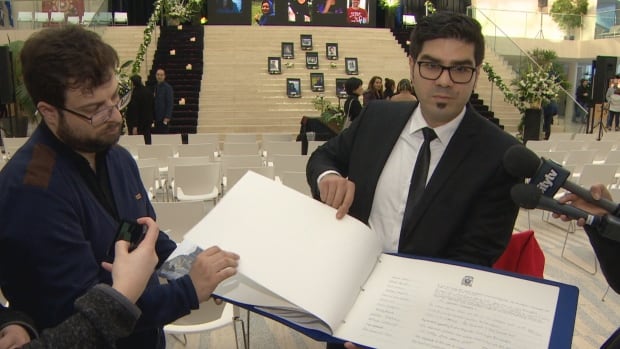 Edmonton city hall hosted a tribute on Saturday afternoon to remember the victims of Ukraine International Airlines Flight 752 that was shot down on Jan. 8.

Mayor Don Iveson was at the tribute to officially present the Iranian Heritage Society of Edmonton with a condolence book for victims’ families. 176 people were killed when the plane was shot down, including 13 people from Edmonton.

Reza Akbari, the Iranian Heritage Society of Edmonton’s president, said he and his group have offered support to victims’ families both in Canada and Iran. But he said he still doesn’t know how to feel 45 days after the crash.

“Every time I see an image or picture of them, I can’t hold my tears. It’s not possible to accept such a catastrophe is happening,” Akbari said.

Akbari said the condolence book presented on Saturday was a beautiful act from the city and its people.

Before presenting the condolence book, Iveson spoke at the tribute to say the City of Edmonton and its people continue to grieve with those impacted by the crash.

“It falls to us to hold and remember their dreams, their hopes, their many accomplishments,” Iveson said.

A common refrain throughout the tribute was ‘We will never forget, we will never forgive,’ as many called for the Canadian government and its allies to pursue justice by further investigating the crash to find the truth of how it occurred.

Iran has said the plane was mistaken for a hostile target amid escalating tensions with the United States. But Canada and its allies have been pushing Iran to release the black boxes from the crash so the data can be properly analyzed by facilities in France.

Akbari and many others supported this call on Saturday. Around 15 people organized after the tribute outside city hall in protest to call for justice.

Javad Soleimani, spoke at the tribute on Saturday. He lost his wife, Elnaz Nabiyi, in the crash. Soleimani said he also supports the Canadian government’s pressure to release information from the plane’s black box.

Soleimani said he was thankful for the support at the tribute on Saturday, but said the last 45 days have been difficult.

“It’s a pain that you cannot remove.” Soleimani said. “You just need to learn how to live with it.”

One month in: Looking back at how Alberta has handled COVID-19

‘Elk poop on every sidewalk’: Animals take over main street, a sign of Banff’s ‘decimated’ economy