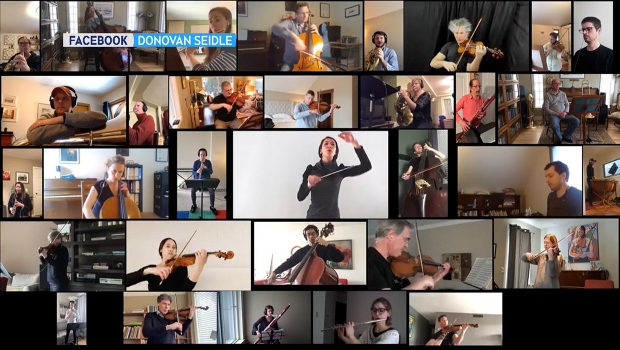 CALGARY — They may not have had a physical audience in front of them but members of the Calgary Philharmonic Orchestra (CPO) and Edmonton Symphony have combined to create one of their most viewed performances.

After 66 Calgary musicians and an additional 18 staff members were temporary laid off amid the COVID-19 pandemic, the group decided to reconnect for a virtual performance while in self-isolation.

A shortage of players prompted calls to have artists from the Edmonton Symphony join in.

“We had a little time on our hands,” said Calgary Philharmonic violinist, Donavan Seidle. So we wanted to put out a video that inspired strength, resilience and hope. I think that’s what a lot of people need right now.”

Seidle edited together each musician’s video submission by carefully fine tuning the audio.

“In order to make is sound like a real symphony orchestra, I virtually placed people in a virtual hall for the reverb and stereo imaging, had people over-dub themselves and send in more than one audio recording.”

It was certainly a lot of work, especially for Janna Sailor who conducted the performance and had all the musicians follow her lead virtually.

“It was one of the most challenging things I’ve ever had to do — I had to imagine the orchestra and hear it in my head and try to project that to my musicians strongly through every gesture,” Sailor said.

“But I always ask myself as an artist how can I give back. We just wanted to use our art and creativity to ease the fear and anxiety were feeling and sensing in our community around us.’

The community response has been overwhelming for the Calgary artists who participated in the virtual performance.

“It’s not a replacement for the real thing,” said principal trumpet player, Adam Zinatelli,”but it’s such a special way to remember what it’s like to be on a team with your friends and colleagues.”

Second section violinist Adrianna Lebedovich was also blown away by the support.

“Despite arts programs being pushed aside in times of crisis, it’s what everyone inevitably turns to,” said Lebedovich. “I think it allows everybody to take a moment, stop what they’re doing and just ‘be’.

“It’s sort of a pause button to everything going on in the world.”

The CPO will be launching its new season at noon on March 31 and remains optimistic it will return to full operation in the not too distant future.

Report of gunshots at Edmonton motel turns out to be fireworks