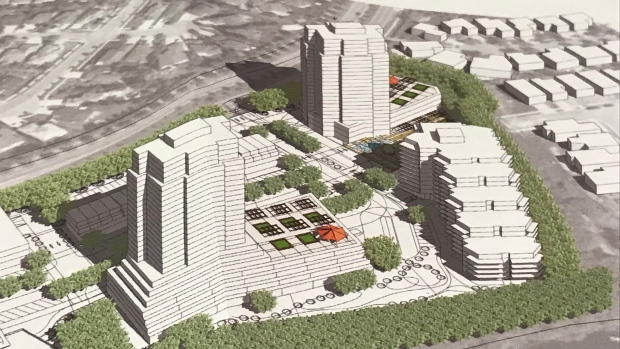 St. Albert could soon be home to 28- and 26-storey towers, the tallest proposed buildings in the city.

Boudreau Communities held a public meeting Tuesday to announce updates to the project, to be built on the former Hole family farm site on Bellerose Drive overlooking the Sturgeon River.

“The whole community can come in, they can enjoy the amenities, they can sit by the river,” said Dave Haut with Boudreau Communities.

At the meeting held at the St. Albert Inn, residents spoke overwhelmingly against the project, expressing concerns with the height of the towers, loss of views and traffic congestion in the area.

“If it does move ahead there will be an out-lash against not only the developer but also city council,” warned resident Jonathan Martin.

Two residents who spoke at the meeting said they’d move if the project goes ahead, but Haut argued the proposal is already sensitive to the neighbours.

“The shadow, in the summer crosses the lawns of people in 30 minutes. So keeping it small, keeping those views, keeping the greenspace, keeping the mature trees around the edges, we just think is the way to develop the site,” Haut said.

The proposal includes an “urban village with a publicly accessible village square,” as part of a mixed-use community projected for completion in 2028.

In 2008, St. Albert City Council approved 25-storey towers as part of the Grandin Mall redevelopment downtown. Those towers have not yet been built.

Province moves away from per-student funding model in education overhaul

This unique camp offers rehabilitation and relaxation for people with aphasia

Young space campers get out of this world experience at TWOS