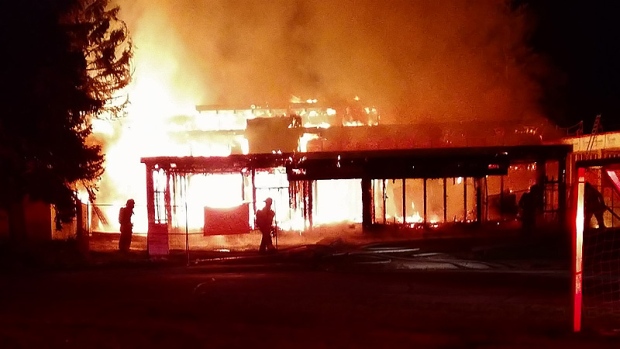 A fire that broke out at an Edmonton home early Friday morning is being investigated.

District Chief Scott Mead said a house fire was reported at 3:28 a.m. near 138 Street and 90 Avenue.

According to EPS, a total of five units were dispatched. When crews arrived on scene at 3:35 a.m., they found the house fully engulfed in flames.

According to Edmonton Fire Rescue Services, no one had been living in the home yet as it was under construction. Neighbouring homes were evacuated.

The cause of the fire is unknown, but it has been deemed suspicious.

“We can’t speculate on the cause right now,” said Mead. “But the house was being worked on for quite some time, I guess. And so it was getting near completion, but it looks like it’s going to be a loss right now.”

EPS confirmed its arson unit is investigating the incident.

Mead said the damage to surrounding properties was limited to a neighbour’s shed.

Crews will continue working on site throughout the day to ensure the fire is completely out.

There is no word yet on a damage estimate.

Hundreds march to legislature in protest of Budget 2020

Thousands march to legislature in protest of Budget 2020