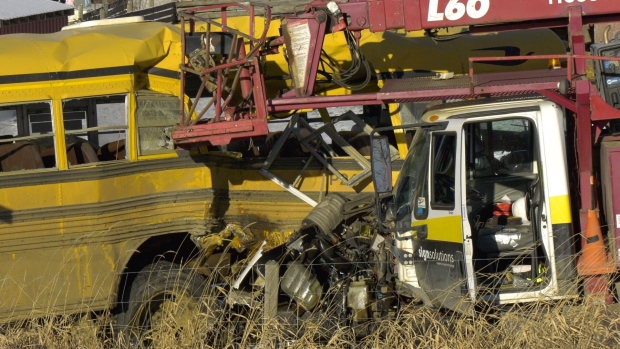 EDMONTON — A GoFundMe page has been launched for the families of the students injured in a school bus crash northeast of Edmonton on Monday morning.

According to RCMP, the bus was heading north on a rural road about five kilometres west of Smoky Lake when it was involved in a crash with a crane that was travelling westbound on the highway.

Police say there were no fatalities as a result of the crash, but eight people were hospitalized and five suffered critical injuries. All of the critically injured patients were transported to hospital in Edmonton.

Shelby Henry, who started the fundraiser, says money raised will help the families be with their loved ones after the crash.

“Smoky Lake is about an hour and a half away from the Stollery, so travel expenses, meals, hotels, childcare, etc, all adds up quickly. It’s unclear how long these kids will be in hospital and anything that we can do to make this time a bit easier is what the community wants to do.”

Police say both drivers have since been released from hospital, and a passenger in the crane was not injured.

Oversized load on the move to northern Alta.