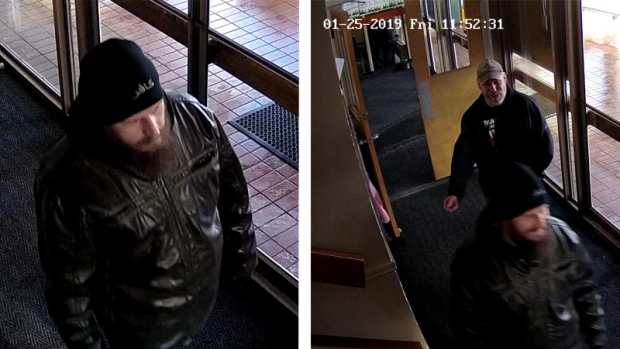 Police are investigating after two men, known to police and considered to be members of an extremist group, entered Edmonton’s Al Rashid Mosque Friday morning.

A spokesperson for the mosque told CTV News it called police on Friday when two men, who they believed to be allied with Sons of Odin, entered the mosque around 11:50 a.m.

One was wearing a toque with “infidel” written in Arabic. Members of the mosque said the men did not try to speak to anyone or respond when approached.

The mosque released security footage photos of the men who they say trespassed and surveilled the building, while a video of a conversation between the men and members of the mosque in the parking lot spread on social media.

The man wearing the toque that read “infidel” told CTV News on Friday he was only at Al Rashid to learn about Islam, and that he went inside to use the washroom.

“I ask questions. So all I was doing today was going to the mosque. I didn’t wear any colors. I wore my toque because it’s my toque,” Tyler Hunt said.

Hunt identified himself as the Northern Alberta Chapter president of the Clann Canadian Infidels. He was associated with Soldiers of Odin until two weeks ago, but called the group racist.

Hunt said he would not speak on behalf of the other men who attended the mosque, nor say their sentiment was anti-Islamic.

Edmonton Police Service confirmed officers responded to the complaint, but said that after the Hate Crimes and Violent Extremism Unit was consulted, no arrests were made.

According to Cheryl Voordenhout, an EPS media relations advisor, some of the individuals were known to police.

With files from Sarah Plowman